Opportunity: down the drain?

Stebbings Valley, apparently the last greenfields development in Wellington City, is a big deal. Until 3rd September we’ve a chance to say we want it to be an asset, not a liability, and a really big reason why is WATER.

Right now we’re being asked to say what we’d want the new Stebbings Valley development to look like.

New shiny greenfields residential development in the Wellington region is actually being done pretty old-school, TBH, which is costing us.

Getting it right(er) at the start is a great investment because retrofitting urban areas to be better is filthy expensive: you pay to undo the bad stuff you paid to build in the first place, you disrupt established people and habits, and you pay again to build better stuff.

So to complement our overview of why and how to do Stebbings Valley better, let’s focus on arguably the most unsung, embattled hero of our everyday lives that gets hit hardest by old-school greenfields development.

Orthodox suburban development in Wellington’s steep terrain means a lot of earthworks, trying to flatten out the ridges (cut them off) and stream gullies (fill them in) to make flat platforms to build stand-alone houses.  Even with on-paper requirements to do sediment control, in real life your subdivision generates a hell of a lot of sediment and this stuff trashes our coasts. Of all the things people do to the sea, sediment is the single biggest thing hurting Porirua’s harbours. (great short video here).  It’s a really big deal. 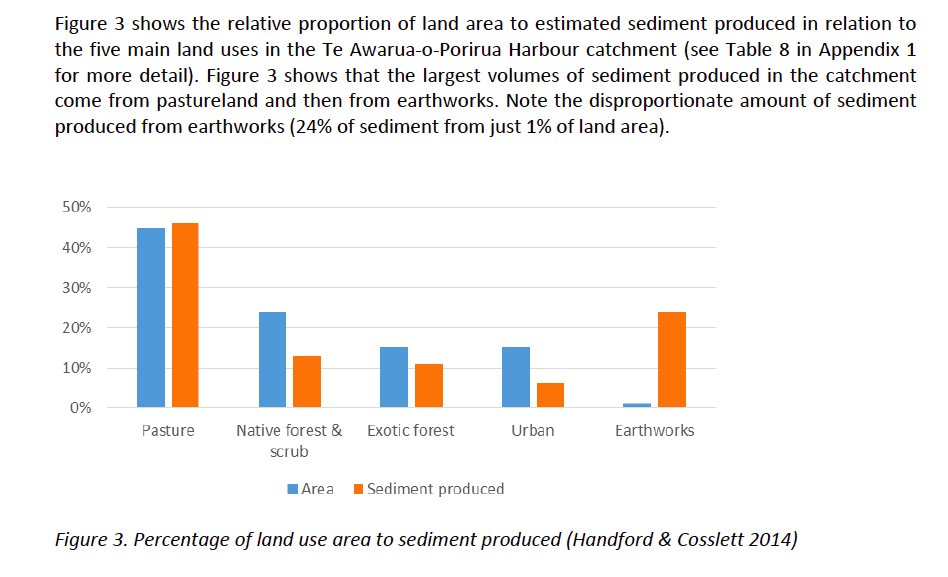 Can you guess which type of activity produces the outrageous amounts of sediment? 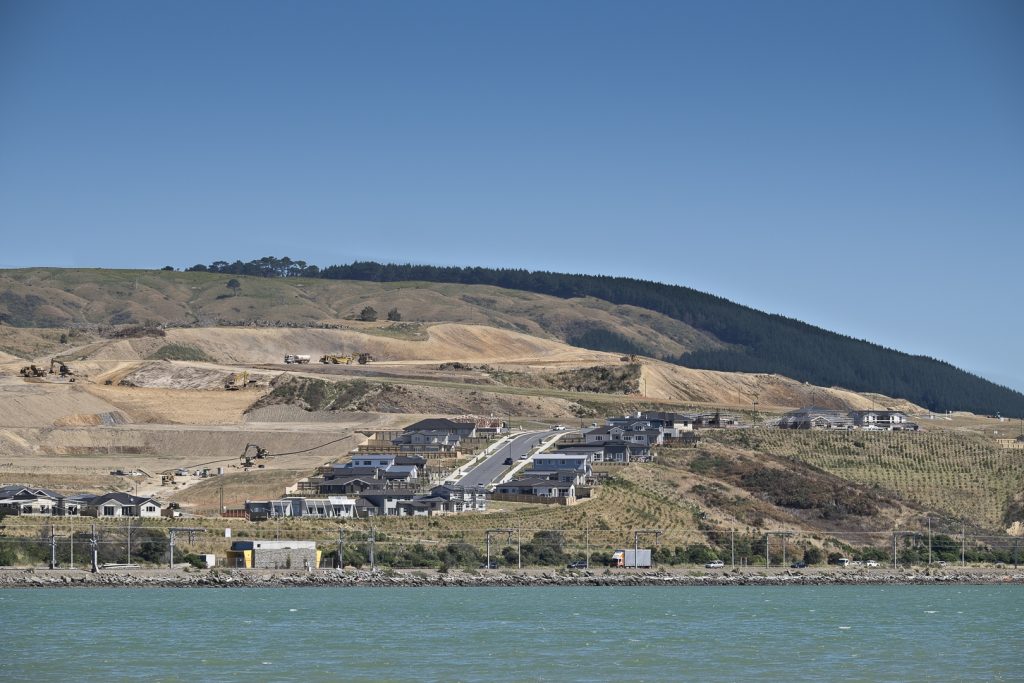 Orthodox suburban development essentially waterproofs the land, sending all rain that falls on it into the stormwater system. As we waterproof more of our hills, it’s all got to somehow fit into the pipes downstream – the same pipes under our town centres, that are struggling to cope even now.

This is what the above map meant for people living in Rangituhi Street.

And there’ll be more hardcore rainstorms in our region thanks to climate change.   (Bonus: uncontrolled runoff from roads is full of the kinds of toxic heavy metals that really mess with life.)

Orthodox wastewater networks are designed to have several “overflows” every year (i.e. raw sewage coming out, and being all up around our feet and in our harbours), otherwise they’re deemed to be over-engineered and “gold plated”.  You could argue (good luck) that four, five, twenty overflows a year might be tolerable (?!) for legacy systems, given all the other demands on rates, but Stebbings will be a brand new suburb. Its sewage (and stormwater) goes north to Porirua, obeying gravity, whereas its rates go south to Wellington City.  And like the stormwater network, the wastewater (sewerage) network is already not coping – even worse in Porirua. 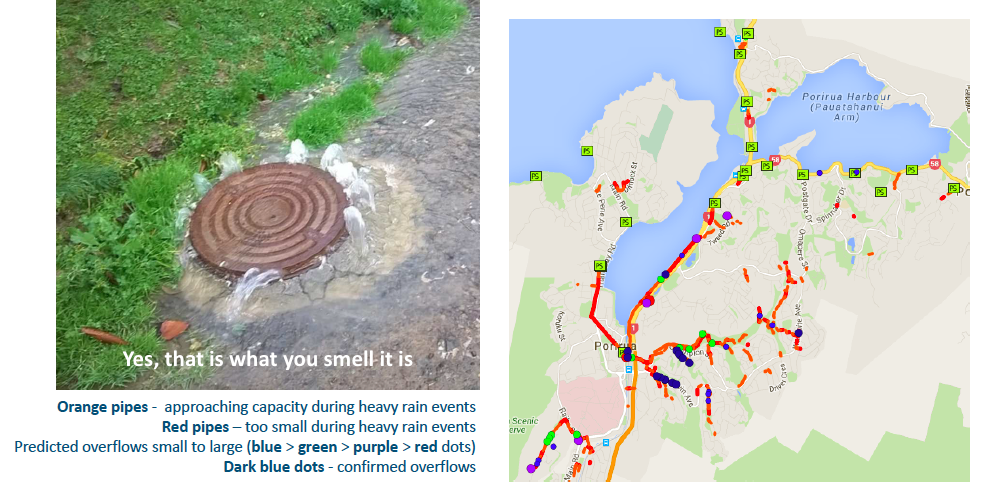 It’s not okay for our region to accept that in this day and age, when more thoughtful development is fast becoming the norm – even Hamilton is doing better than we are (how embarrassing!)

What’s the right way, then?

Better development can mean a suburb is much less bad for the local water (amongst many other benefits!), and way better for the public purse.

Here are three of the top things that developers should do, that are bog-standard in plenty of Australian cities (and even getting so in NZ):

1.Work with the natural contours of the land: no cutting off hillsides nor filling in streams, not creating bench terraces. Minimise earthworks – it’s as simple as that!

2. Build in elementary water-sensitivity – even just the elements about absorbing rain where it falls: roof tanks on every house, rain gardens to absorb road runoff, minimising impermeable (waterproof) surfaces. 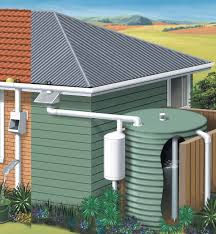 Every roof with a tank that takes the first dump of rain: great for all sorts of reasons

3. Build the sewerage network properly for expected loads including future-proofing.  There’s lots of clever folk thinking about this, like the WaterNZ special interest group on wastewater infrastructure modelling. 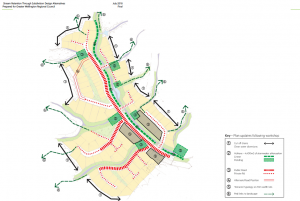 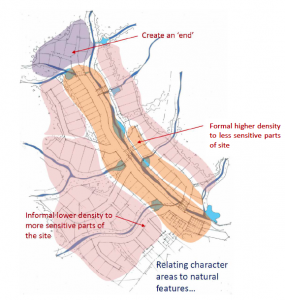 2 Elementary water-sensitivity – stopping more rain runoff at source- means we all save $$$ on downstream infrastructure costs on the public purse.

That’s literally downstream, not “in the future” – because downstream we’ve got lots of intense landuse and you don’t want to be digging up roads and buildings to lay bigger pipes because you’ve waterproofed uphill.

3. Decent sewerage network capacity means you don’t have to worry that your poo is going on someone’s beach, in their waka ama, on their toddler – or you’ll only have to worry about that when there’s been a genuinely incredible storm.  That’s quite good (and is also a legal obligation on our local government). 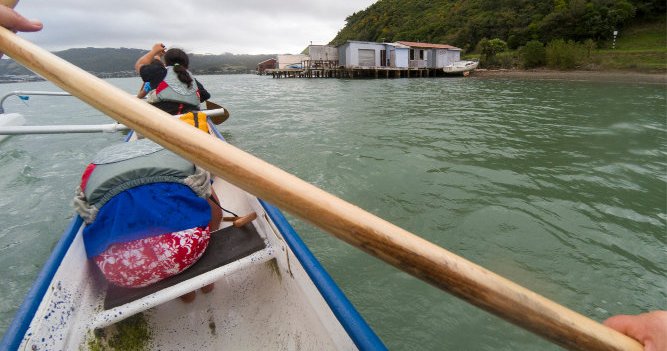 You shouldn’t have to worry about my poo. End of story.

Essentially it’s new and unfamiliar, and it costs more upfront.

Talk Wellington has canvassed the web and here’s our prediction of the cries that will be heard throughout the region when there’s a strong call for better development:

We’ll hear that this is “too different to what we’ve been doing in NZ for the last 50 years, we’re not Europe, this is NZ, we need a tailored local approach”.

This is probably quite true.

But when are we going to say “Cool, now’s the time to pull your socks up”? Kiwis aren’t used to water-sensible development in the same way we aren’t used to well-designed accessible suburbs with strong hearts. But does that mean we should be played for suckers until we cotton on to the benefits, leaving our kids to deal with the cost of retrofitting the pipes, streets, buildings to be better, and dealing with ruined harbours? 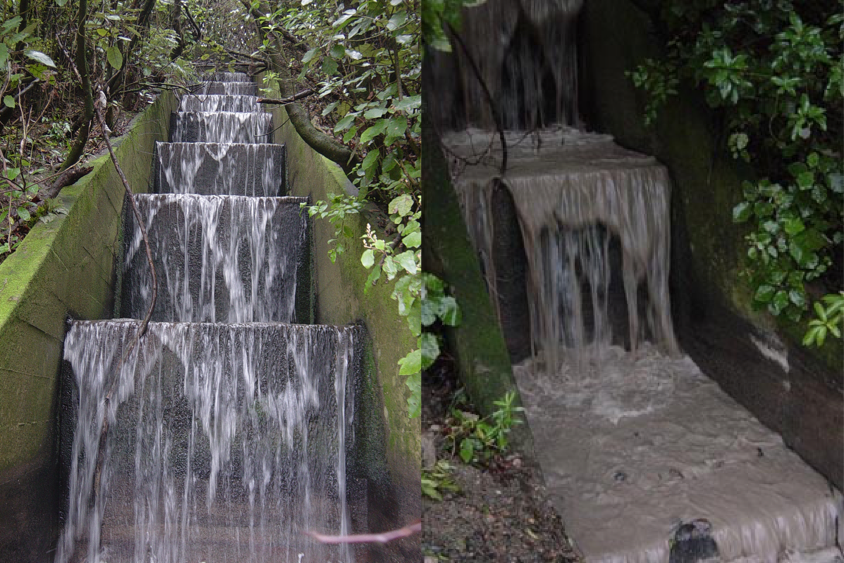 Rowell’s Falls, before and during the extensive cut-and-fill earthworks to make the orthodox greenfield subdivision north of Grenada. According to the Glenside Progressive Association, sediment discharges like this and worse are typical of these kinds of earthworks. Frankly, not OK.

We’ll hear “We’ll never be able to get the builders, there’ll be no houses for ages, the housing crisis will worsen!”

It’s true our local residential construction sector is much less familiar with this basic good development vs doing things the more traditional ways – it’s true for medium-density as well as for environmentally sensible developments. But firstly, if there are few local developers capable of doing this, but there are developers elsewhere (Kāpiti?!) they’ll probably come in to do the work. That makes a lot of commercial sense.  Or perhaps local builders will just start contracting in people to guide them. That makes commercial sense too.

We’ll hear “nobody with a family wants to live in medium density! What about the children?!”

Yes, NZ has a long (Pākehā) tradition of the nuclear-only family home having its own lawn, garage, rotary clothesline.  (It also has a much longer tradition of multi-generational living.)

NZ also has long traditions of doing other things that we’ve realised aren’t sacred ways, and for which we’re finding better ways to do it (dairying, gender equity in employment, using CFCs.). Families need to be able to do certain things to be happy, healthy and connected but there are all sorts of ways to provide them.  And as families, higher density living can often give us objectively better quality of life  than the quarter-acre paradise (or 700 square metre McMansion).  Great, accessible places to play and kid-friendly streets and neighbourhoods often make a bigger contribution to your family’s quality of life than whether you’ve a handkerchief lawn or need a ride-on mower.

We’ll hear “All this will put greater costs on the developers, they’ll go develop elsewhere!”

Nobody likes to think they’ll be a wallflower at the dance.  But let’s first do a quick bullsh*t test, and then think about whether that partner is really one we want to cosy up to.

Firstly – the test. Wellington is NZ’s second largest urban centre.  Its economy is strong. People want to live here. How likely is it, really, really, that no developers will want to come play just because we’re bringing our development standards into the 21st century? (Or even the 20th in terms of water infrastructure would be good!)

Undoubtedly some developers will be dissuaded. It’ll probably take a little longer – we might have people wailing that we’ll be a wallflower.  But ultimately, cities draw people in, ours are doing that too, and developers are market players. Our leaders are accustomed to having to make difficult decisions based on current and future costs and payoffs.  That’s what they’re there to do.

Wellington, we shouldn’t lose our nerve and feel desperate – we’re not.

Secondly, let’s take a cool look at what we might end up with if we are frightened into letting (more) mediocre development be done.

We’ll end up with something we’ll be hard pressed to call an asset.

Does Wellington really want to be known in developer circles as the sucker place you can go make money when your product isn’t good enough for Auckland or even Hamilton, because Wellington’s happy to push the costs onto their next generations? We’ll hear “landowners will be robbed of their rightful gains, by a stroke of some bureaucrat’s pen!”

The owners of the Stebbings Valley land, the Callendar family, have been land banking farmland shrewdly for decades ahead of residential development.  That’s only sensible, as the rules have meant they will make eye-watering amounts of profit [figure 9.9 here]. (And Kiwi property investors of all kinds, including “Mum and Dad” investors, have done the same for decades with other quirks of our rules).

But the windfall gains that a land-banker stands to gain  will come with costs to the rest of us through sewerage, stormwater, sediment, as well as benefits to us all if the developments are properly liveable. So making sure the social costs are minimised is worth it even if it means a dent in the landowner’s profit.

OK, how do we get the good stuff happening?

Ultimately, we’re all paying for poor practice.  So whether or not we’ve made it complicated, it’s absolutely clear it’s not ok.

This is a complex space, for sure. There’s a rich interplay between private sector, public sector, all different interests. And for sure council are part of the problem, with dumb elements of their books and policies that make good development unnecessarily difficult (or seem counterintuitive to the public).  And there are systemic problems like national-level investment rules.

But there’s a lot about this we can shape because Council does have a lot of power: they’ll write the structure plan .

Let’s have a go, folks, because for a while the window is open to shape this future suburb.

Don’t let this opportunity go down the drain.

Jump in and give your 2c.

If you’re stuck for ideas, and this article has struck a chord, just make sure you say what outcome you want there to be. You don’t have to design things or tell them how to do it – just tick as priorities

Where they ask “Thinking about your current community, what attributes, features or characteristics do you value?”

You can also add dimensions that annoy you that you’d like to be better (e.g. we can’t ever see or get to any natural water; the harbour has already been thrashed in the past … )

“What else is important?” – have a little rant about how it’s not OK that we’re trashing harbours and creeks, and it’s 2018: it’s time to pull our socks up.

Go on!    We’ve only got til the end of Monday 3rd September.