Facing towards our water

Why do we love being near water? The best bits of Wellington’s towns bring people to water, and Riverlink is now turning Lower Hutt’s face to Te Awa Kairangi.

The Hutt River, Te Awa Kairangi, has been engineered hard over the last century to reduce the frequency of flooding (and massively raising the stakes).  Despite people’s primal connection to water, and the particular importance of the river to  Te Atiawa, the city has developed around its civic centre and the mall.  It’s disconnected from the river and its pathway by State Highway 2 and an inhospitable swathe of built-up area.

Right now, this is between you and the beautiful Awa Kairangi. Photo: Google

The river’s high degree of engineering (with its flow straightened and constrained into one channel), isn’t going to change soon: there’s simply too much human investment in the original floodplain.So while Riverlink isn’t a de-engineering and restoration project like its Los Angeles equivalent it’s still making the river immeasurably more accessible for people – a great thing for everyone, especially Lower Hutt city.

In some seriously joined-up sounding work, Greater Wellington Regional Council, Hutt City Council and the NZ Transport Agency are combining city urban design and transport improvements with flood protection works as Riverlink. The plan is to do something similar to Christchurch’s Ōtakaro precinct, building mixed-use high-density buildings that (gasp!) face towards the river and integrate with people-friendly movement spaces (cycling and walking paths) and a promenade on the top of the stopbank. It will be well connected to buses and park’n’ride for the train.

Check out these drawings from designers Boffa Miskell 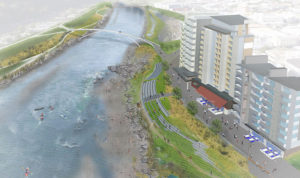 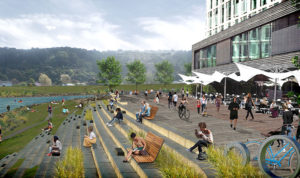 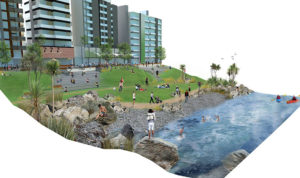 Property developers are already talking it up as a boost for property values.

Does your suburb or town face its water?  If you have a river or stream, can people easily get to it and overlook it?

Something you can do: