It was 2014 the last time the council asked people about cycling in Newtown and Berhampore, since when “the c word” has barely been heard there. But they’re asking again, now, til Tuesday 5pm, and you should leap in there because things have changed, folks. They’re doing it right!

Newtown, Berhampore and Mount Cook are busy, bustling, lively and growing parts of Wellington. The streetscapes, like most of Wellington’s, don’t serve people nearly as well as they should. Lots of things contribute to the streets not offering people enough choices to get around, especially for short trips. like most NZ urban streets these days, driving is the “least worst” option.
Essentially, the Newtown – Berhampore – Mount Cook streets are shaping our behaviour – the environment prevents people from walking, scooting, bussing, biking, wheelchairing as much as we’d like. Not unusual, but not good enough.

Besides forcing us to…

…having to drive short trips impoverishes our experience of our neighbourhoods.

Just check out these kids’ drawings of their commute to school. Can you guess who’s travelling to school under their own steam, and who’s driven? 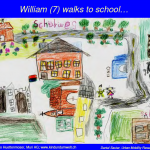 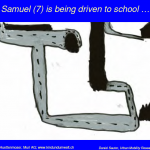 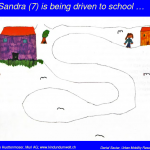 Engineers: “A problem! We know how to fix it!”

What normally happens with roading issues: Experts investigate, do some due diligence, come up with solutions, and get public input before taking the final set of streetscape changes to councillors for ultimate sign-off and the go-ahead to build / paint / dig up etc.
This has been based on a culture of experts knowing best: their insights about how streets should serve society are by far the most material to the issue. Councillors ultimately need to approve things, but transport and traffic are technical things and experts’ domain.
This how Wellington City Council approached the original Island Bay to the City cycleway work, executing a cheerful but vague direction by councillors to spend more making streets safer for cycling. The officers used a pretty standard process: some investigation and technical due diligence (in this case, Opus and in-house engineers in 2012-13), they identified an infrastructure treatment (separated, protected cycleway) and a route (The Parade), and asked for people’s thoughts on having that vs the status quo.
The rest is history.

2014 engagement on the Newtown-Berhampore section of the cycleway, though much better than Island Bay,[PDF 449 KB] was dominated by the discourse further south.
And since then, progress on people-friendly streetscapes in Wellington – especially for people to cycle, but also for things like lower speed limits – has been set back years.
(A word to the wise: If you’d like to be better-informed about what happened in Island Bay than the media, popular rumour, or Facebook would have you be, we recommend the ever-reasonable, thoughtful and relentlessly evidence-based accounts here.)
But now: sing it from the rooftops, everyone: history isn’t repeating!

There’s already been a lot of good info gathered for the first step, characterising the problem and the opportunities. (More, in fact, seems to have been gathered about this stuff in the southern suburbs than for the ASB Sports Centre (a cool $44 million).)
But they want more! Which is great!
Until 5pm Tuesday 17th you can:

“…rate the different ways you, and other people move around this area. We’re also interested in how you get around, where you live, and what places you usually go.
Each person’s unique experience is important, so we’d love to hear from all the members of your household, including the kids.”

Our feedback at this stage will help them decide what options should be looked at in more detail.

Note the next steps yet to come. This is thorough, dear readers, and careful. Credit where credit’s due: WCC are Doing It Right.
There’s a drop-in too, and one can apparently upload any kind of stuff – a video, a picture you’ve drawn – whatever!

Schools are putting it out through their newsletters – hooray!

Nice to see South Wellington Intermediate promoting @WgtnCC’s Newtown Connections consultation in their newsletter this week. Have you had your say yet? https://t.co/RLXMTYDIqj pic.twitter.com/iC6aorwtVO

It could be a bit better

It must be said: this is mostly about improving the streets so that more people can choose to cycle, while also trying to cater for (or maybe at least not mess up?) the experience for people walking, scooting, bussing.
If we had our way it would a more truly holistic approach to reshaping our streets, but that’s probably the influence of the cursed silos by which our local government funds and delivers transport stuff (cycling separate from walking separate from buses separate from trains separate from private cars).
Don’t get us wrong: cycling is the most dramatically under-served choice in Wellington compared to the benefits of mobility that it brings people, with the least cost to society. It’s just a fact that for short trips, for kids, for getting around your neighbourhood A to B, and for making it less hard for us to be good to our climate, cycling needs to become a viable choice for far more people to get around Newtown, Berhampore and Mount Cook.
So while it may not be doing bussing and walking and cycling and scooting and wheelchairing all equally, it’s legitimate to focus on cycling – and they’re clearly trying pretty hard to be holistic.
The engagements like this are completely excellent and generating really valuable information – which (at least according to what the DomPost decided to report) turned out to be mostly not about cycling.
And perhaps with the new government and NZTA talking all “multi modal”, councils will be too… we’re feeling more hopeful than before that the not-cycling insights we give through this engagement will be taken and used.

(Now we just have to hope that Let’s Get Wellington Moving will come to the party and do mass transit that complements this good stuff, and the imminent bus changes, so that people genuinely have a choice to leave the car at home if they want to. The public research says they should!)

Signs of things to come?

You could argue that the spending on community engagement around this is crazy huge, and that engineers should just get on with it.
But the social licence to change streetscapes has shifted – nationwide, not just in Wellington.
If it means we spend more upfront to get better proposals for change, and have healthier, better-informed conversations about them, that’s an unequivocally great investment. Medium and long term we’ll all be better off.

Get your neighbours, your friends, your kids – everyone!

DO it now!
Image credits: