Open Streets – please sir, can we have some more?

Open Streets Wellington was totally worth it. Check out our report and gallery and then send us YOUR pictures of the day!

Well would you look at that!

(Such a success that big flash Auckland were envious). People had a fab time getting fresh air and exercise and actually enjoying their streets.

There were no cars, the streets were ours and it was totally worth it.

Deck chairs were set up, little oases were created, and the heart of our city felt like it really had a heart – and a community.

Taking space back from the vehicles meant that kids felt safe on their scooters, parents felt comfortable letting them scoot off, and people had the right of way.  There was dancing, biking, eating, hanging out.

Of course it could be better and we can do it even better next time – for example it was a shame there weren’t more locally-owned places open to eat in some areas (one mum we spoke to spent $40 with her kids at McDonalds which bothered her: “I’d far rather give that to some local business but when the kids are hungry, there was nothing on the open route where we were”.)

But the Council and the various partners did a great job publicising, organising and activating the spaces formerly the exclusive domain of machines.

It was a lovely spring day (and considering some of the spring days since, we were lucky) which got us thinking – as summer comes in, wouldn’t it be nice to have MORE??

Could we have Open Streets once a month during summer?

Or even weekly? Cities like Bogotà and Los Angeles now do them regularly – Bogotà every Sunday.

We’re the ones who matter! Check out the pics below and then send us your snaps.

Remember to @ us and use the hashtags #openstreets #getwellyliving #getwellymoving 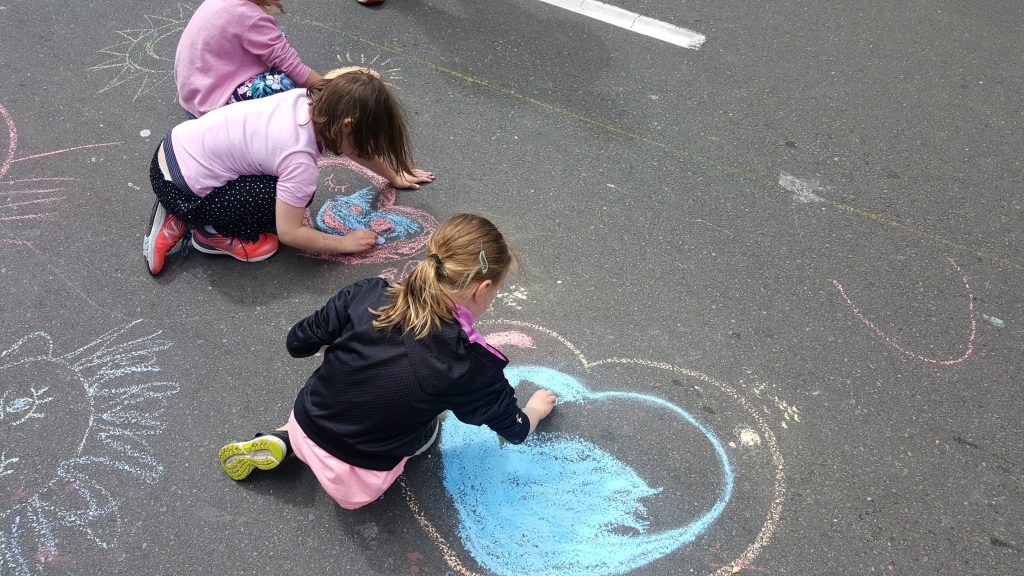 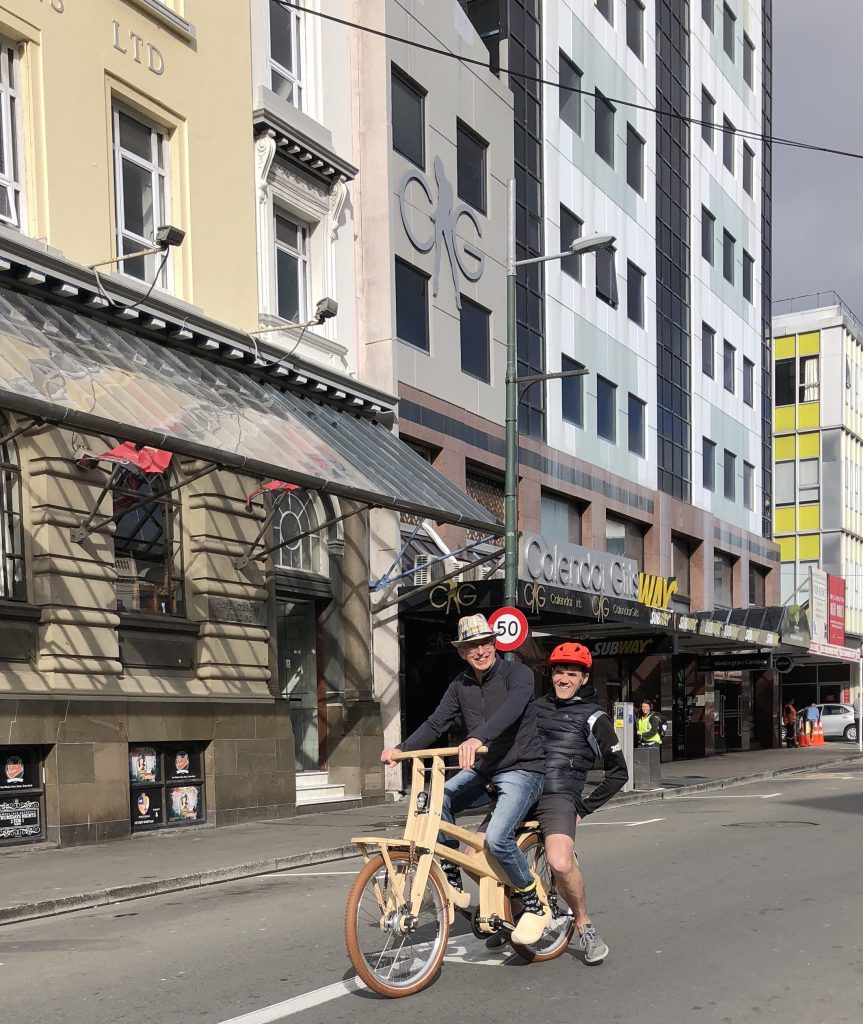 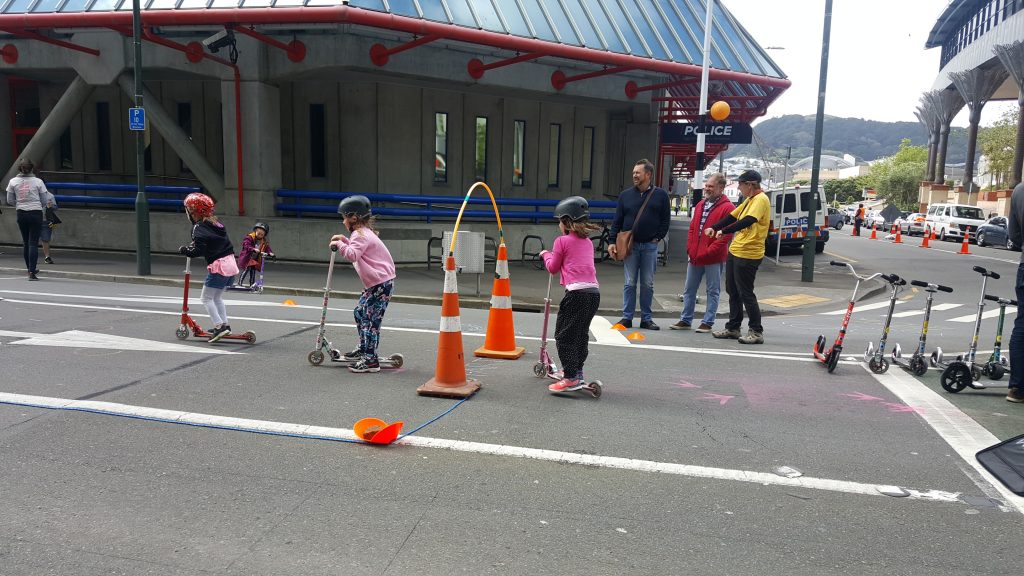 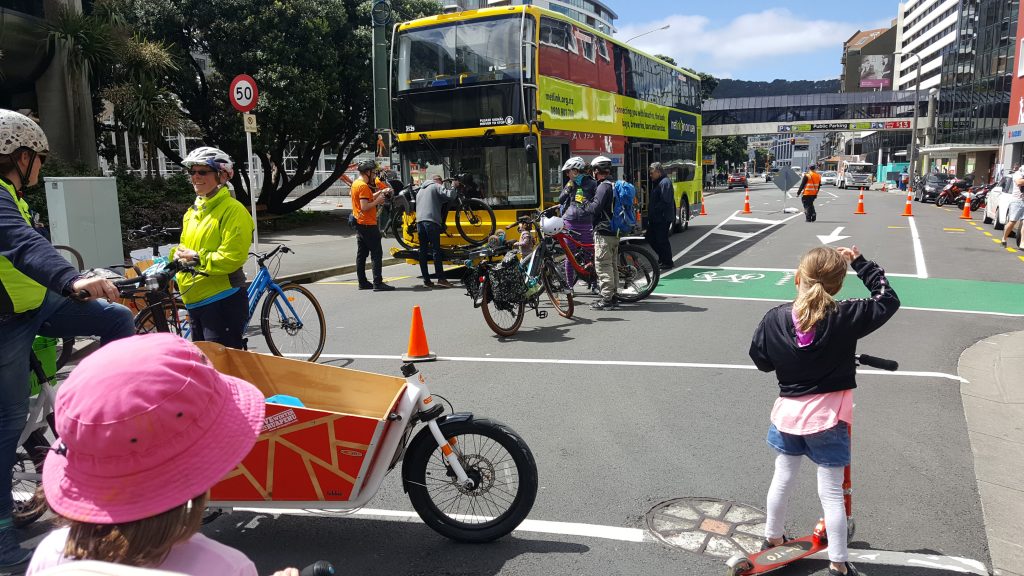 Great time to try putting your bike on the bus’s special bike-carrier! 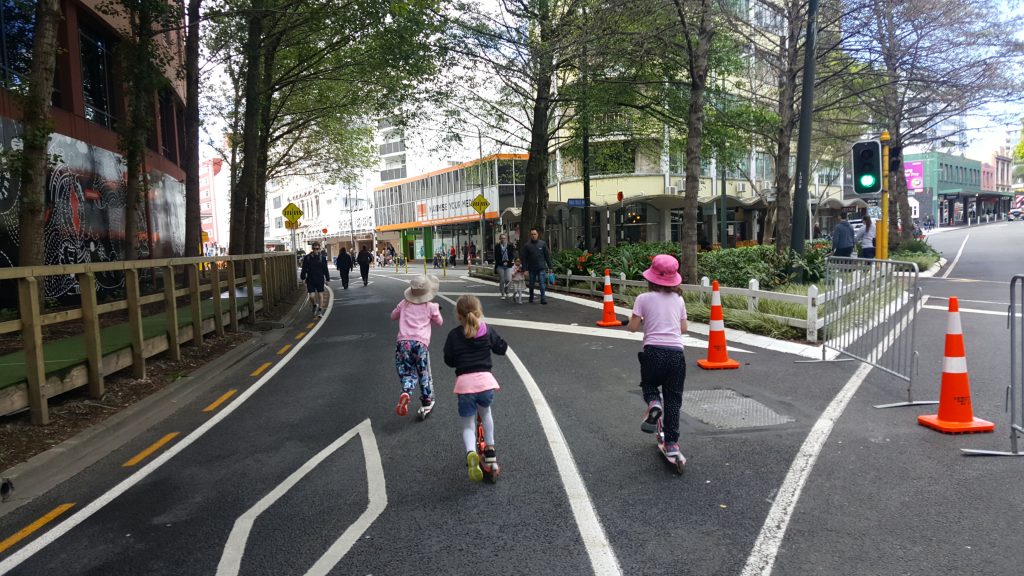 Look at all the space for happy humans 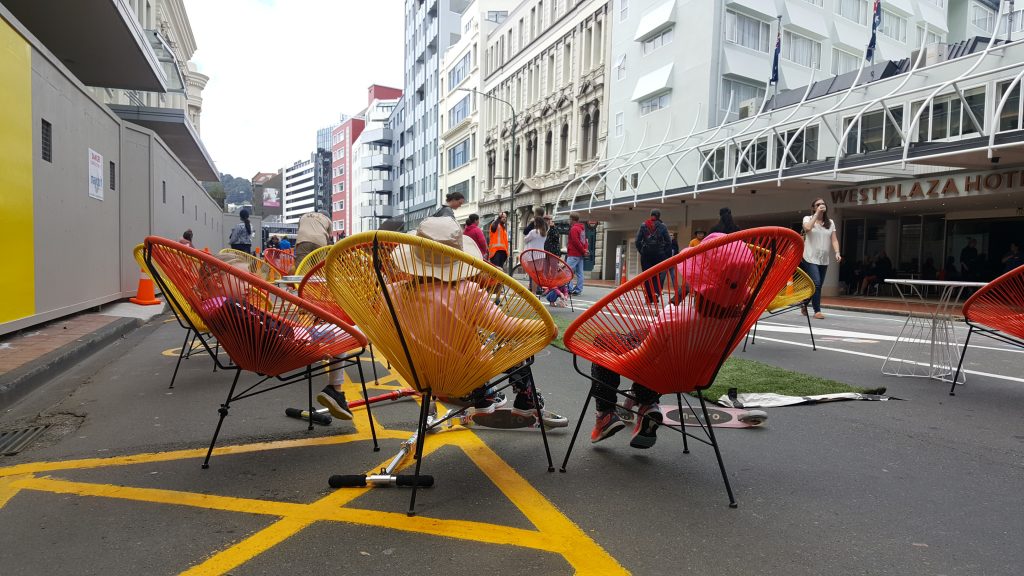 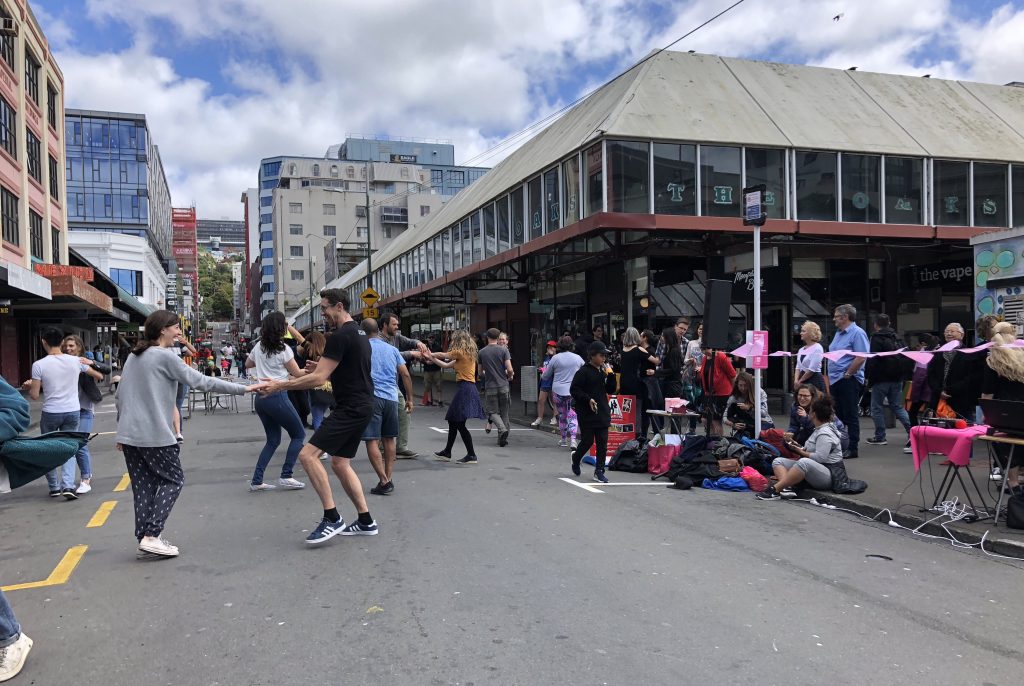 Dancing in the street! 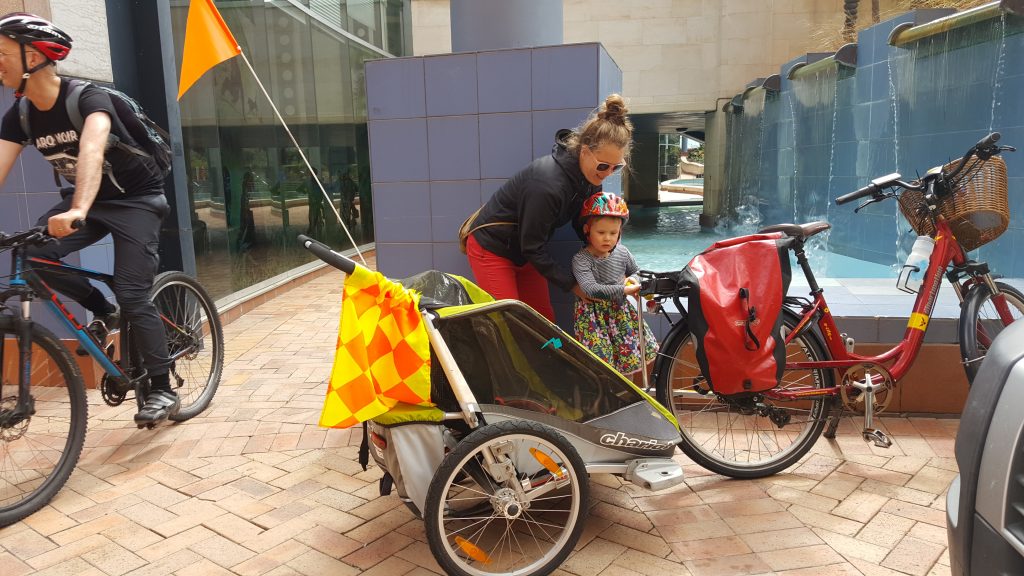 Mum Katherine: “I don’t normally bring my littlies into town like this because of the traffic but it felt so safe and we really enjoyed ourselves!”

Even Taranaki St – one of the widest, most vehicle-dominated streets in the city can become a place for people 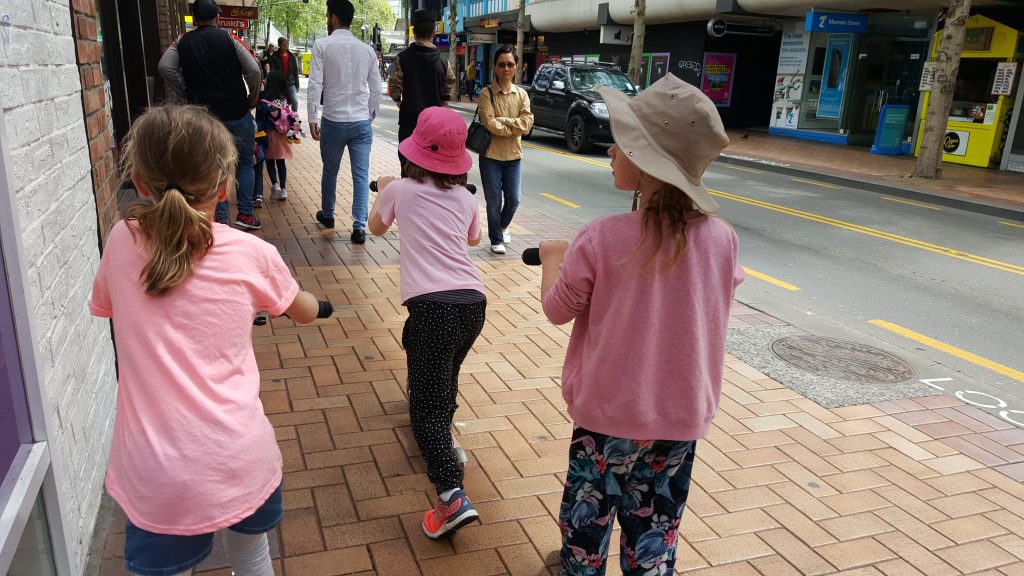 Cramped on the footpath…back to reality

Remember to @ us and use the hashtags #openstreets #getwellyliving #getwellymoving

One comment on “Open Streets – please sir, can we have some more?”