In this weekend’s food for thought: optimism, excitement and innovation in Christchurch – scrapped, top to bottom.  Was a key regeneration project doomed, did someone kill it, or did we starve it? 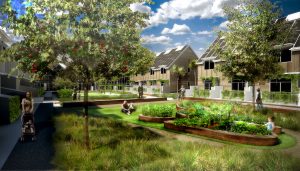 An artist’s impression of the courtyard in one Breathe proposal

The Breathe urban village, the product of a public urban design competition, was an anchor project for Christchurch that began with optimism and excitement – not to mention Grand Designs‘ Kevin McCloud!

Yet this key residential project, aimed at attracting people back into Christchurch’s central city post-quake, failed to get off the ground.

Dr Lin Roberts has released a paper in Lincoln University’s planning journal examining why the Breathe Project failed. There are some pretty damning findings about how the government worked in post-quake Christchurch.

“The Government was unwilling or unable to recognise that an insistence on a pure market approach would not deliver the innovative sustainable village asked for in the competition brief, and failed to factor in the opportunity cost to government, local government, local businesses and the wider Christchurch community of delaying by many years the residential development of the eastern side of the city.

As a result, the early vision of the vitality that a thriving residential neighbourhood would bring to the city has not yet been realised.”

Press  for the paper includes this excoriating quote:

“This level of naïve neoliberal faith that the markets could deliver urban regeneration to a badly damaged city was not seen even in Margaret Thatcher’s Britain.”

The Christchurch Press’s coverage has some reasonable-sounding outrage from those involved.

Would the government do a better job of regeneration in Wellington’s towns when our Big One strikes?