The Let’s Get Welly Riding Vision

Riding e-bikes and scooters is often the most affordable and quickest way to get around Wellington, but the lack of safe infrastructure has been blocking people from choosing these new vehicles.

Here we lay out a plan to create space for them. 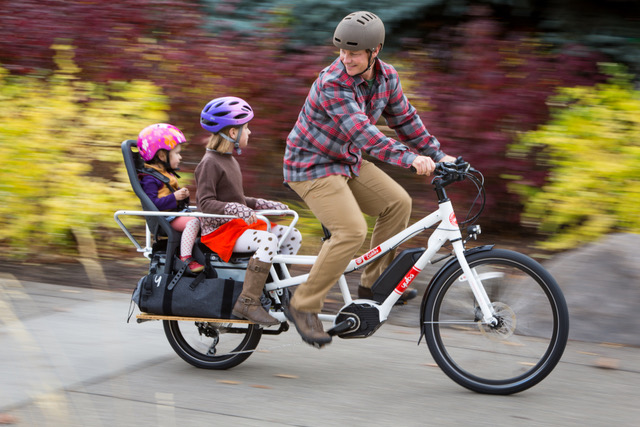 Where is Welly heading?

Wellington is set to grow by 80,000+ residents within the next 30 years. Most of these folks will live in denser developments near the city. Moving all these residents around requires a rethink – we can’t do the same things that we’ve been doing with cars.

Let’s Get Welly Moving is a great start. It lays out ambitious plans for movement in the central city, but it doesn’t really unlock the wider suburbs.

Riding to work is booming

We’re already seeing a massive increase in the number of people cycling in Wellington. More than 2300 people are riding their bikes and scooters on their commute into the central city daily, and their numbers are growing rapidly. Just in the last year, we’ve seen a 25% increase of folks riding into town via the Karori Tunnel and ~40% coming in from round the bays.

Wellingtonians are taking to riding. And there’s a reason why….

The New World of Micromobility

Electric bikes and now scooters are exploding in popularity.

And for personally owned bikes and scooters, we’ve seen 100% sales growth in New Zealand in the last 6 months, on top of 98% in 2018. Even at conservative levels of growth, we’re on track to add 56,000 new ebikes/scooters nationally this year, and we’ll see 1.1m+ new micromobility vehicles on the road in NZ by 2025 (an order of magnitude more than what is envisaged for electric cars, even with the forthcoming incentive schemes). 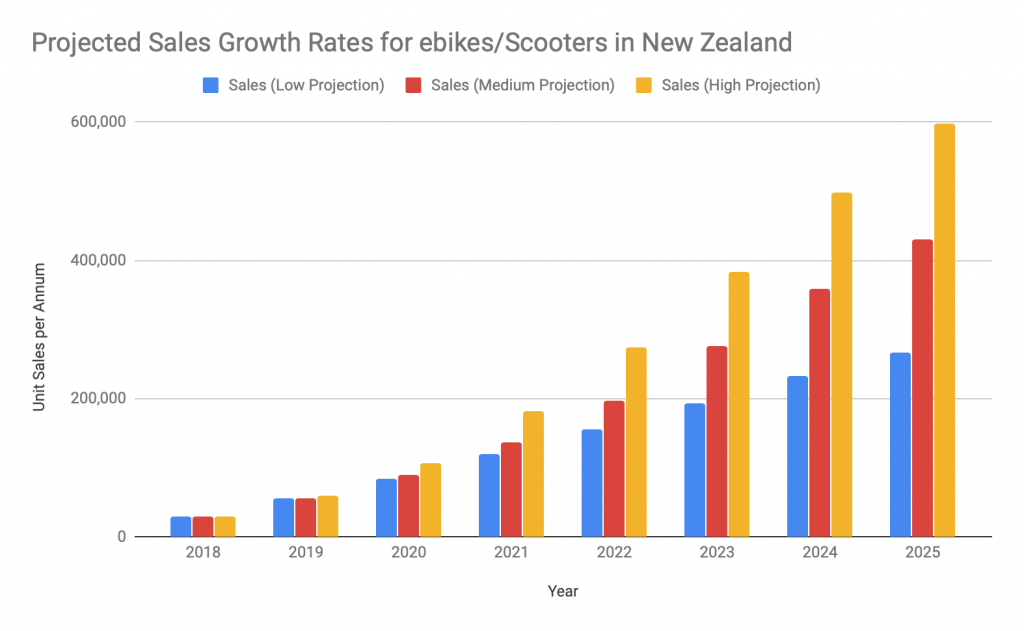 It’s easy to understand why.

They’re radically coming down in price: Decent e-scooters are now $600-1000, while electric bikes now have salary rebate and interest free finance schemes that bring the upfront costs down. For many, these vehicles replace the second car. For someone paying for parking in the city and commuting into the city from Tawa/Plimmerton/Porirua, changing to having a scooter/taking the train can save $7k a year even if they rent a car for a few days a month when they need it.

They flatten the steep Wellington terrain: with an average 300w motor in your scooter or e-bike, it’s like adding an extra few versions of yourself to assist with the riding, and more powerful versions are coming.

They’re the fastest overall solution for getting around: In New Zealand, 56% of the trips that we take are less than 5km. These smaller vehicles don’t have the hassles of finding and paying for parking and slip through car congestion. With a highly congested downtown in Wellington a lot of riders are switching to e-bikes because it’s simply the most fastest option.

If the Wellington region is to have its population’s shares of micromobilty vehicles (a reasonable assumption given lower car ownership and higher than average incomes) then that’d mean an additional 175,000 new ebikes/scooters by 2025.

If 30% if these were used for commutes, that’s an additional ~40,000 people using these vehicles (either directly, or in combination with public transport) to get into work each day. For context, that’s a 10x increase since 2013 and would put riding these vehicles at the same number of people currently coming into the city by train or bus COMBINED. 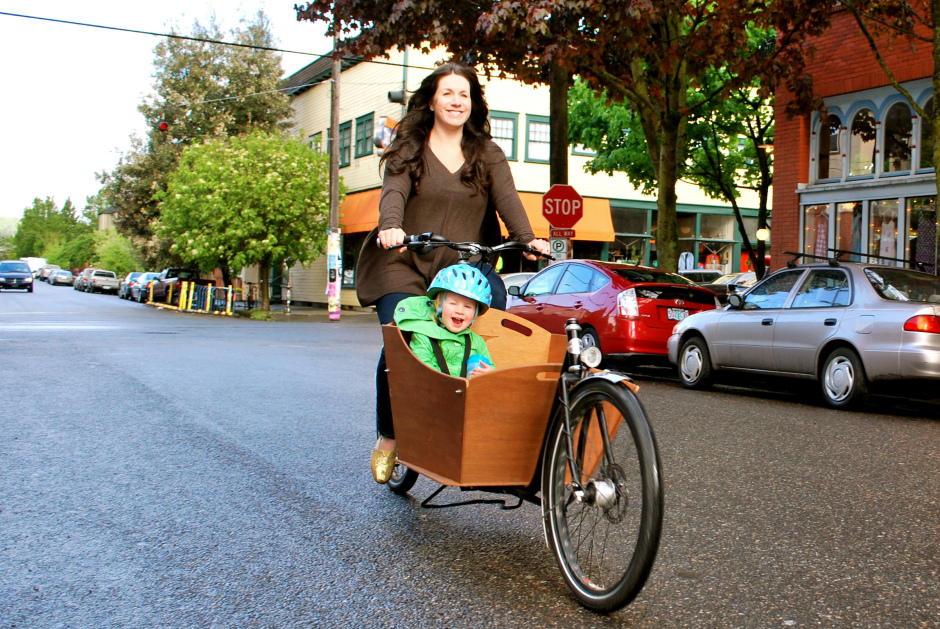 The best research we have in NZ cites safe cycling infrastructure as the biggest determinants as to whether people feel safe getting on a bike and riding into work.

In short, people want to use these vehicles, but they want to feel safe doing so.

So how are we doing in Wellington?

The council developed a Cycle Masterplan that was developed in 2015.

It was based on 2014 projections for cycling demand, done before we really understood the growth potential of these new electric modes.

It mapped out where we COULD put in better infrastructure, but punted building most of the big infrastructure near the city out to 2021-28 and the outer suburbs to post-2028.

Since then, they approved $74m of funding (of which $33m comes from NZTA) in the 2018-28 Long Term Plan to build connections from the CBD to Kilbirnie/Miramar, Mt Cook, Brooklyn and Newtown over the next 10 years.

It’s slower than needed. The world has changed, and the plan needs a rethink.

The Let’s Get Welly Riding Vision is an ambitious vision of a network built to enable a less congested, more fun, accessible and cheaper-to-get-around city.

Actually pretty similar to the existing plan, just done sooner and better than was originally planned. 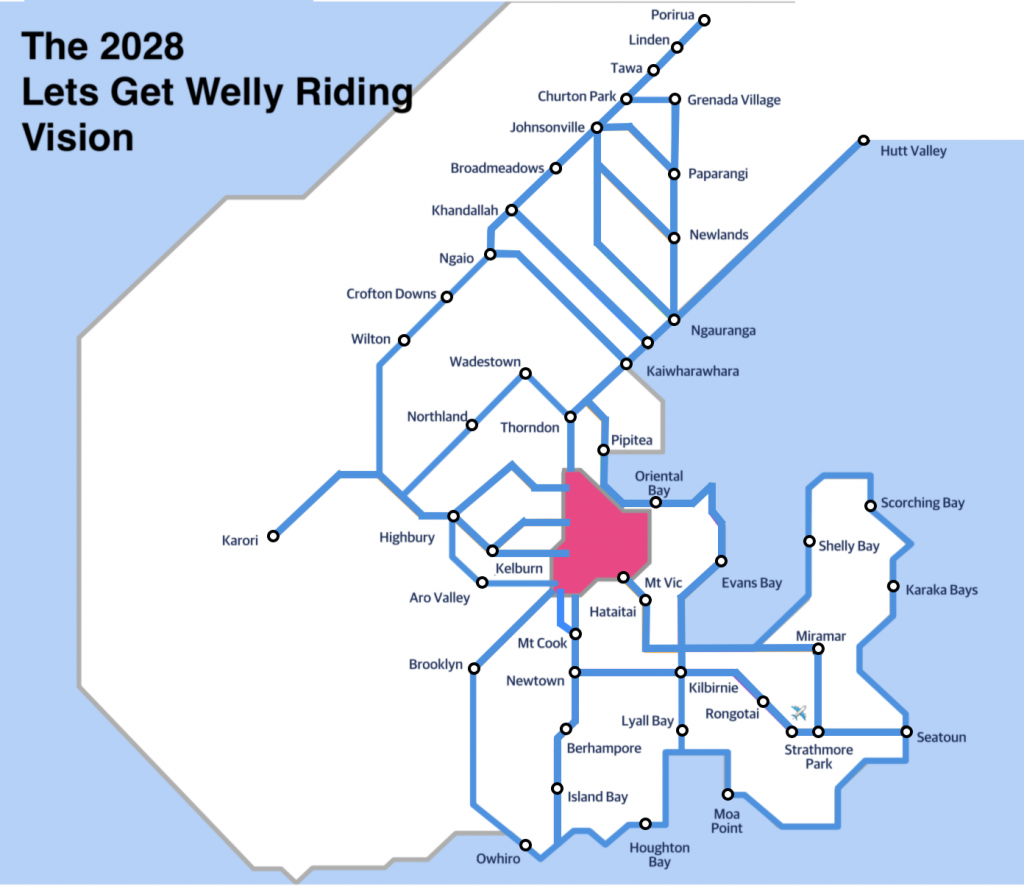 We propose bringing forward construction on major parts of planned Stage 3 (currently 2021-28) and Stage 4 (2028+) projects into a staggered Stage 3a and 3b plan to be completed in 2021-26, with all major pieces originally mapped out to be completed by 2028.

We also suggest the addition of a new set of cycleways not currently on the Masterplan:

Key points about the Vision: 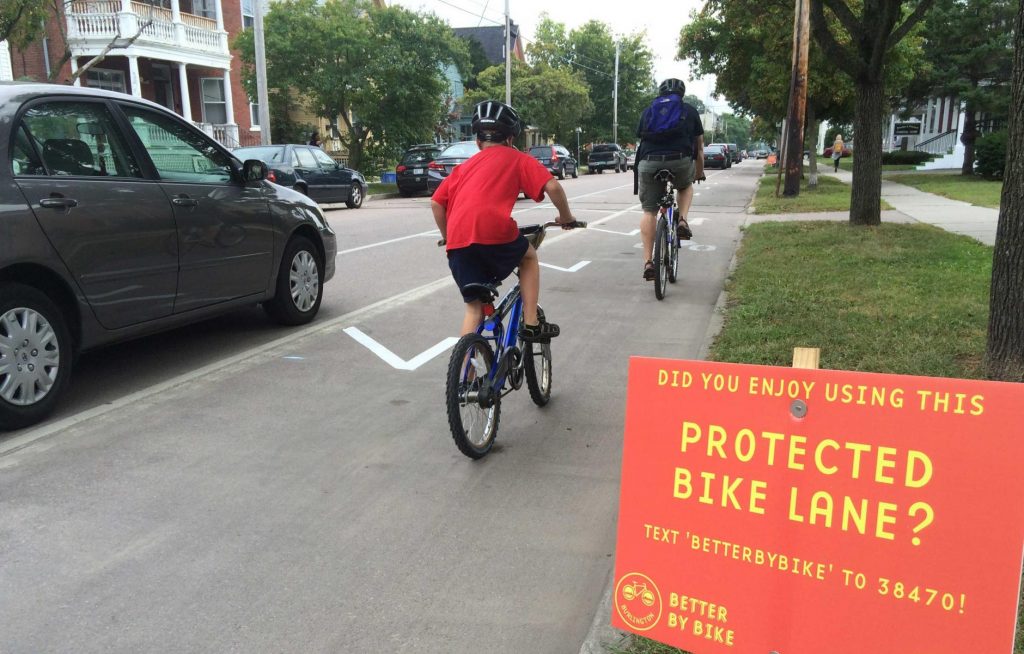 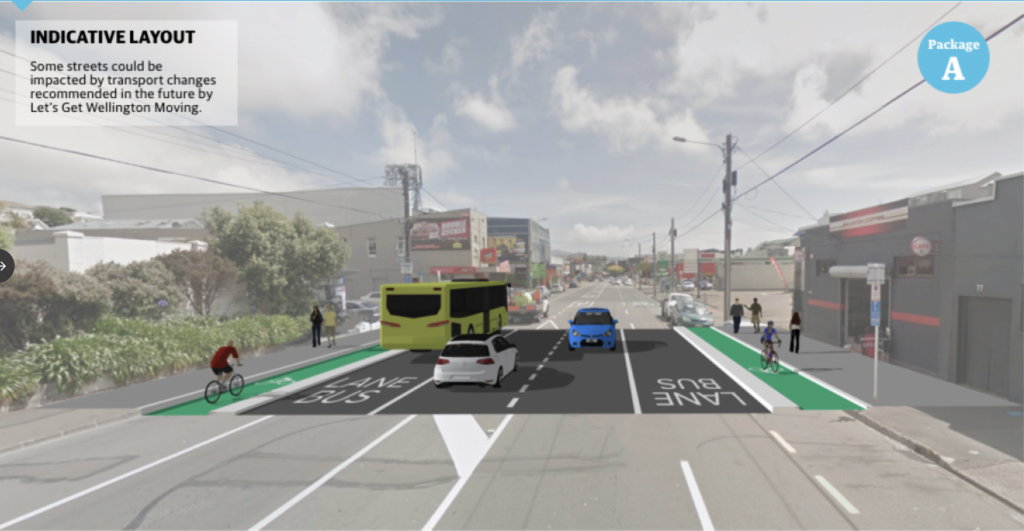 What benefits could we expect to see from this?

Why should we do this now?

We’re aware this is ambitious.

That said, we’re simultaneously facing both a climate emergency and an explosion in this form of low-emission, cheap, point-to-point transport that supports our public transport network, can be supported with cheap infrastructure and is causing headaches on our sidewalks.

If we’re going to make a smart bet on what to lean into for our transport future, this is it.

There’s a couple of compelling reasons why NOW is the time to act:

So how much will it cost?

When the council originally looked at the network in 2015, the total works were costed out for at around $100m.

But it was costed on inadequate infrastructure (ie a fair bit of paint on the road without any protection etc.) and some of the figures were way off. The proposed Oriental-Kilbrinie connection via Evans Bay Parade that is currently under construction was originally costed at $200,000 for 8.8km of painted bike lane, but then greenlighted for $10m because a proper separated cycleway was needed to connect Kilbirnie/Miramar etc safely.

It’s clear that we’ll need to rethink this as well. 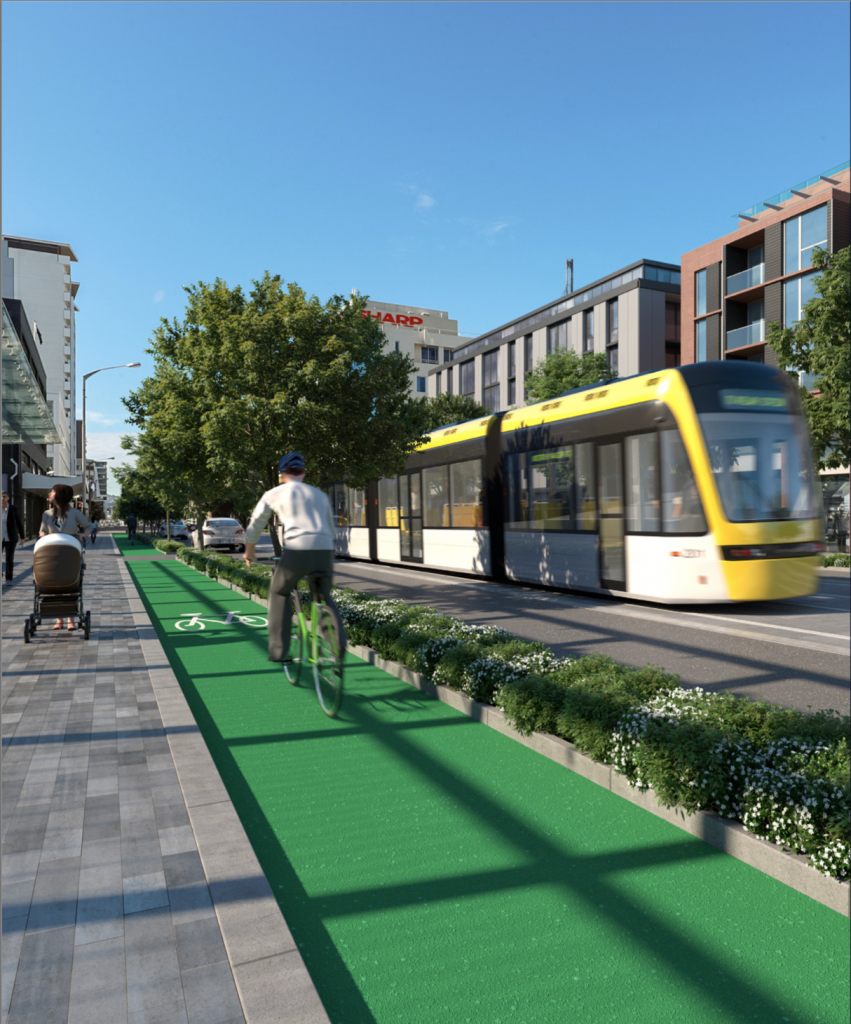 It largely depends on whether we implement separated bike lane construction (~$3.8m/km and take a 2-3 years to design/contract/build) or shoot for tactical urbanism options ($150k/km and quick to design/implement). With the 136km of routes in the Vision, we’ve split these up into core projects and tactical interventions that can prove the case/complete parts of the network.

There is already $30m of funding on the table for LGWM and the council has already budgeted $74.5m, so we’re looking at an increase of around $290m over existing spending. There’s more becoming available via the NZTA National Land Transport Programme for safety improvements.

For context, $400m is the same cost for a new lane in the Terrace tunnel and a little bit of widening of SH1 up to Ngauranga Gorge. For the cost of a single lane of additional traffic for a few km’s into the city (and no improvements to handle any of that congestion once they arrive), we’d have a fully functioning and comprehensive network to support hundreds of thousands of safe, cheap, fast trips every day.

Is that an investment worth making? We think so.

So, what would be the most logical next steps?

The Lets Get Welly Riding Vision is the start of a conversation. We intend for it to be something to point to, debate and discuss.

With the local body elections coming up in October, we encourage you to approach your candidates with a challenge to endorse or critique this proposal.

Additionally, we are developing a presentation (with talking points) that you can use to present to groups, companies and communities relevant to you. We’ll do our first public presentation on this in October when Oliver is back from hosting The Micromobility Conference. More details to follow soon!

We’re designing this for Wellingtonians to take this and run (or ride, as the case may be).

We hope you are inspired and join us in making Welly the best place in the world to live!

[Ed: Sounds generally good? We think so too. There’s a petition to capture general supportive vibes, link here. Put your X on it now, and share! ]

One comment on “The Let’s Get Welly Riding Vision”