As good as it gets

Naenae is, in many ways, a microcosm of contemporary New Zealand.  Guest author Annanonymous writes about what you see in Naenae as an outsider, and what that means for all of us.

This article was originally posted on  THE END IS NAENAE, 7 MAY 2017

It’s about nine years since our family moved to Naenae, and a little over one year since we moved away.

If you know the place, you’ll know its history, its quirks and its charms.  Kids roam together, laughing and playing, riding bikes and mucking around by the Waiwhetu stream, like they did a generation ago.

At the annual festival, the Māori and Pasifika kids’ groups take the stage, shining like stars. The Somali community gathers, supported sometimes by the kick-arse Anglican church.* A Sikh temple rises up where the New World used to be.

Naenae was built on a vision of the dignity of people. You can see it in the design of the (ex)state houses, including the one we used to own. Our home was solid and strong, like the ideal it was intended to represent.

The backyard was ample – enough to grow a suburb’s worth of veges – and featured a bountiful plum tree that provoked my angry hatred of plums every year.  Plums are dicks.**

The laundry of the house was hilariously large, in keeping with the work of women back in the day, but out of all proportion to my actual desire to do laundry. And the lounge and bedrooms were small, making it difficult to hide from the laundry I didn’t want to do. 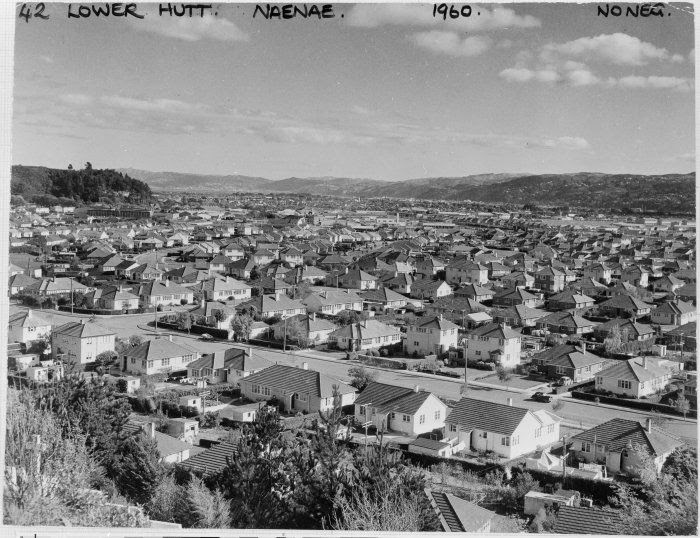 But what started as a vision, an ideal, of postwar New Zealand was left to erode. The design of state houses – in Naenae, and elsewhere – became uglier, their tenants stigmatised.  Big sections designed for growing kids and crops led to clumsy urban sprawl.

Maybe most importantly, the economy that sustained Naenae was disrupted, wrenched by the changes of the 80s and 90s.

I’m not one of those who thought New Zealand’s sluggish manufacturing sector could last forever. But there can be no pretence that the pain of change was equally shared. Take a walk through what was once Naenae’s thriving light industrial area. You’ll see every other enterprise is closed down, leaving unoccupied sites like gappy teeth in a fading smile.

We moved to Naenae pretty naively and without preconceptions: newcomers from the South Island, with one income and modest equity from the sale of our first home.

This is not a tale about how being middle class ain’t what it used to be – although when there are households making $80k, but paying $40k in rent, that’s a problem in its own right. And it’s not a story about poverty. There are many people who can write about that more knowledgeably, more skilfully, than I can.

It’s a story of impoverishment. I’ll try to explain what I mean.

The house itself was part of the problem.  The kind of mould whose spores, when breathed, hospitalise the children of the poor crept up the kids’ bedroom wall.  I rubbed the black and green dots angrily with bleach; but I could only retard them, not eliminate them.  The kids slept in one room, because one room was what we could afford to heat.  (To tell the truth, the kids were very close, and ardent snugglers, so it was no hardship.)

And there was the crime.  Sometimes it was petty.  The baffling theft from our lawn of a colourful plaster of Paris cockatoo statue (WTF?) left uncharitably by the house’s previous owner.  Or the stealing one night of our very large metal gate, in a scandal I dubbed ‘Gate-gate’.  There was also more serious crime – another story for another day.

That stuff sucked.  Really, it sucked.  But at the end of the day, we were people with prospects, kind of, and homeowners in a society where home ownership is increasingly the line that divides the haves from the have-nots.  We were gradually scraping together more equity, biding time until our household income increased. Shitty though it was at times, we were tourists of other people’s adversity, there because of the vagaries of the housing market, just passing through.

One day I was cleaning out the cupboards of our Naenae home.  The house was too little, too pokey, for hoarding.  Amongst the things I found were dust-covered toys – not just the children’s, but their parents’.

And so I pondered.  I could take this stuff to the op shop, or even to the dump, but I knew a family living nearby didn’t have it easy.  Still, I didn’t want to sweep in with something that looked like patronising philanthropy, and a few shit jigsaw puzzles stuffed in a plastic bag. What to do?

I took the plunge, figuring that if my dorky charity caused offense, I’d get told to bugger off – a thought that was strangely comforting.  I walked around, knocked on the door, explained myself.  Would the kids be interested in the bits and pieces I was discovering?  It’s nothing flash, I stressed. If you don’t like them, you could just chuck them out.  I got a ‘yes’.

Back home I went, and cleaned, dusted, packaged up things of the past.  When I returned, there were the neighbours’ kids.  Two little girls sitting on the door step, four bare knees in a row, open smiles.  It turned out that for an entire hour, they’d been sitting there with anticipation, waiting for me to return. Lamely, I handed over the anti-climactic bag of odds and ends.  The little ones embraced it like it was Christmas.

Hours later that day, wandering back from the supermarket with groceries in hand, I saw the little ones again.  They were outside their home, telling a visitor breathlessly about the lady who came to their house.  Came to their house with the awesome things.

In the area of Naenae where we lived, families were typically like ours. They worked when work was available, mowed the lawns, had friends and family around, got the kids to school fed, clean and on time.

Whether or not they know it consciously – or whether it simply sits in the backs of their minds, affirming their life expectations – my own kids are growing up with a sense of their birthright.  That birthright is more than the privilege of living in a household for whom a car breakdown, a dental bill, an outgrown school uniform is not a disaster.

It’s about educational opportunities and toys, visits to libraries and museums, that sow the seeds of cultural capital young.  It’s having the knowledge that you will succeed in school – because if you’re not succeeding, a well-educated parent will self-confidently step in and advocate for you.

Most of all, it’s about knowing that effort leads to reward in a relatively simple equation.  Qualifications are gained and stable employment follows.  Student loans are paid off, then mortgages.

Work hard, get somewhere: easy. But along the way, that simple equation got broken; by jobs that are poorly paid and insecure; by childcare costs that swallow earnings; by debt that can’t be escaped.

Impoverishment is being locked out of the birthright that we used to believe belongs to everybody.  It’s knowing that whatever today brings is probably as good as it gets.

After passing the kids and their house, I arrived home with the groceries, put them away, quietly thinking to myself.  This is a nothing little story about a nothing little incident – and yet it sticks in my throat and in my mind.

Here’s a thing you can do.

For months, staff at KFC, Carls Jnr and Pizza Hutt have been negotiating with their employer, Restaurant Brands. They started out asking for 10c an hour more each year for three years – a sum many people wouldn’t stoop to pick up on the street. They’ve recently achieved what’s billed as a “major victory”: $1 more per hour.

You can email your views to feedback@rbd.co.nz. This cannot be as good as it gets.

* Tell me this is not kick-arse.

** Although I am partial to a black doris plum, all other plums can and must go to hell. When I was seven or eight, I went to visit my Great Aunt Annie in Winton. I ate too many plums, and I wanted to vom. It stuck with me. Another time at her house, I watched an Easter movie about the crucifixion of Jesus. I didn’t like that much either. Now I can’t really face plums, and I can take or leave Christianity. I’ve really got no quality of life left at all, unless you count cat pictures on the interweb.

2 comments on “As good as it gets”