Wellington has long been quietly smug about our best-in-NZ public transport. It’s time to make it really bear dividends for Wellington City.  Guest author Guy M has been walking, photographing and thinking.

Let’s Get Wellington Moving  is a great idea, but it seems a little slow on progress. We’re assured that behind the scenes, great strides are being made. A public transport system worth of our city is being crafted, option by option.

Well, I can’t wait. There are some certain things that we can, and should, be debating now. Key amongst these are the type of transport we might be using, but just as important is the route that this public transport might take. All these things are intertwined.

The big issue, as I’m sure you know, is that at present the fine rail system we have stops dead at the Wellington Railway Station. From there, it is either buses (or trolley buses), or walk, or taxi, or bicycle. That’s one heck of a mode change right there, and it’s great, except that not everyone wants to spend their whole lives out in the Hutt or in Porirua or up the Kapiti Coast or in the Wairarapa. And in fact thousands of these people pour into Wellington every day, joining the growing population living in the city.  That excellent train system we have (and we do – it is New Zealand’s best and most comprehensive public transport network) ends right at the point where we need it most – in Wellington city.

Everyone is moving rapidly around in the city, trying to live, work and play while using good swift transport – transport that gets people around with the most efficiency and least harm to the liveability of the city.

I’m not going to get into what public transport system we need right now, I’ll save my thoughts on that for another day. But what I do want to impress upon you is the necessity to extend the high quality public transport south, and to discuss which route that PT system might travel.

Let’s look at what we’ve got. First up, we have the Golden Mile, the ring of almost continuous shops that circle Wellington from Parliament down to the Embassy, starting off with our former beachside main street, the once nautical goods yard of Lambton Quay. The great thing about Lambton Quay is that in terms of pedestrian flow it is essentially one sided. Nowhere else in New Zealand, possibly nowhere else in the world is there a flow so uninterrupted as the west side of Lambton.

The continuous stretch of footpath is uninterrupted by cross roads except for the two tiny interventions of Farmers Lane and Woodward Street, all the way from the bottom of Bowen Street right round to the corner of Boulcott and Willis. In public thoroughfare terms, that’s impressive.

That also means that with the almost total absence of crossings, it is a really good place to run public transport, and we’ve done exactly that for the past 150 odd years. Traffic can run unhindered by side streets, and that enables traffic to run relatively freely, not having to stop at traffic lights like Queen Street does in Auckland. The west side of the street always runs a little smoother than the east side, as the east side has to cope with vehicles turning off into Panama, Brandon, etc. The pedestrians know this and so the foot counts on the west side of the street are far higher than those on the eastern side, and rents are correspondingly higher. It makes Lambton Quay the simplest choice for public transport.

But is there another route available for us to use? Does traffic really HAVE to go down Lambton Quay? Actually, you could almost say we are spoiled for choice. If we don’t want to use the curvaceous shape of Lambton Quay, we have another Quay available to use – a straighter option. The great advantage of being a harbourside city of course means that we have another option with virtually no side roads – the route made up of Waterloo Quay, Customhouse Quay and Jervois Quay. There are only some small, rarely used traffic crossovers – into the carparks at TSB Arena, Te Wellington Museum, Te Papa, etc. It is a really valid route, easily implemented, on an already wide road, but it is furthest from where the people are, walking down Lambton Quay. So, less convenient for pedestrians, but really good for uninterrupted high speed public transport! 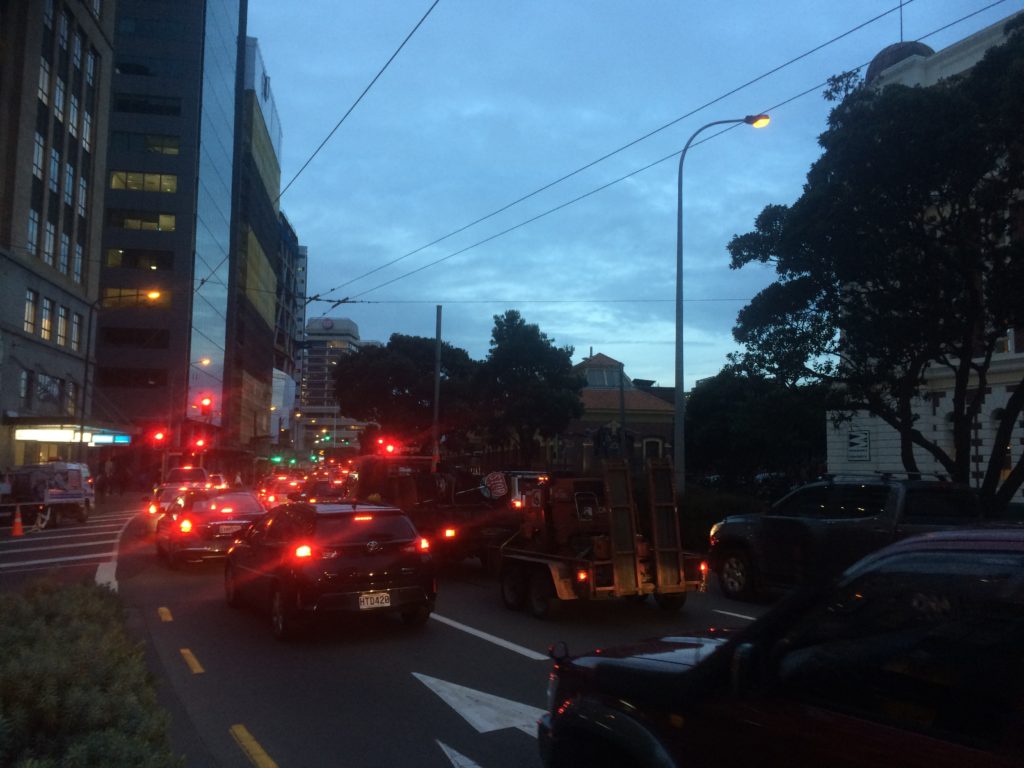 There is also another route we could use – straight down the middle of Featherston Street. On the face of it, it’s not such a good choice. It is crossed over by numerous small side streets like Johnstone, Brandon, Panama and Waring Taylor, which interrupt the route and could slow it down. But it is perfectly aligned from one side of the Railway Station, right down to the awkward intersection with Lambton Quay. It has a lot going for it as a prime PT route. It could be made over completely for public transport, leaving cars on the Quays and pedestrians on the Golden Mile. So – which route to take? 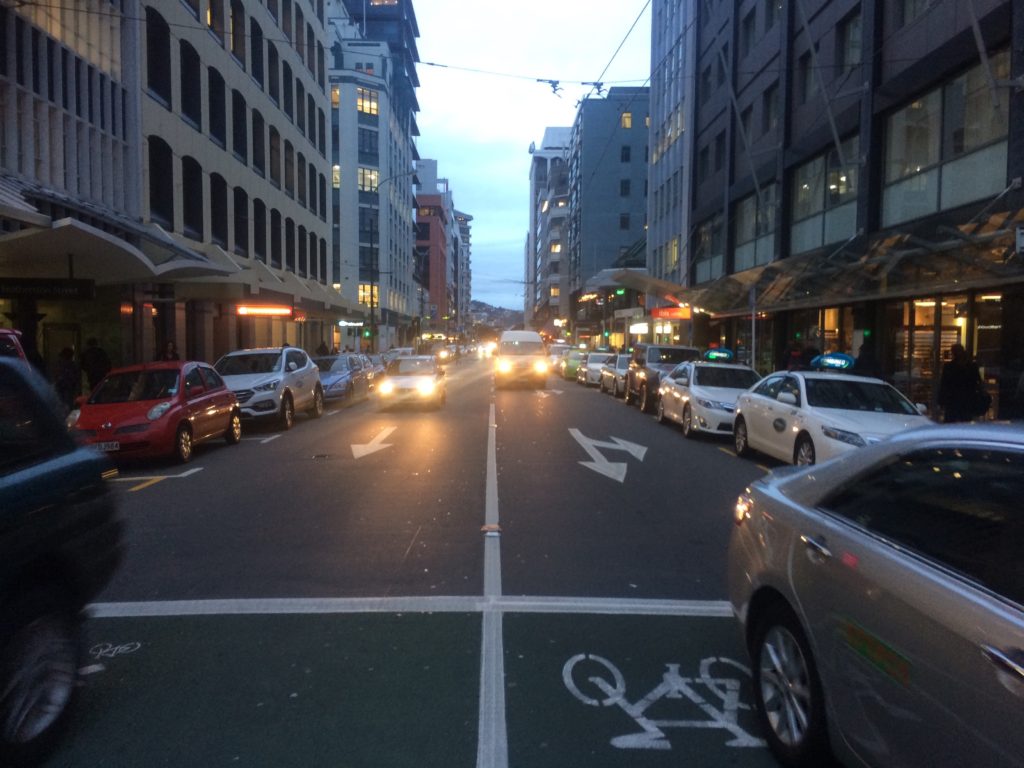 There’s a catch in the tale of course – there’s always a catch. Wellington not only has this remarkable unbroken stretch of footpath and roadway, but also has a pinch point in city planning that is as unrivalled as anywhere else – Clay Point. So named from the very earliest days of Pākeha settlement in Wellington (the clay made for a handy brickworks right there), the beach near Clay Point (just near the intersection of Lambton Quay and Willis Street) ran out either side of a huge rocky, mud-covered projection into the harbour, with winds that battered the land so hard that at times people were blown clean off their feet  (should have been named Windy Point!). 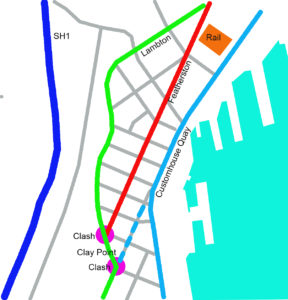 Famous city founder John Plimmer beached the remains of the ship Inconstant here and established his ship-shop – Plimmer’s Ark, covered now by the four buildings make up the old BNZ buildings. This very pinch point, that makes the city so exciting, still continues to give us a headache today at Stewart Dawson’s Corner. It impinges on our possible public transport routes in a big way. Featherston Street runs into one side of it and Willis Street straddles the other side of it – and what we need most of all is a decent speedy connection between the two. This is the pinch-point of Wellington right here – it is the shortest distance from the hillside to the harbour right here, and there are really only three roads at this point – Jervois Quay, Victoria Street and Willis Street. Can we keep one just for cars, one just for buses and one for high speed public transport?

Let’s assume for the moment that one day in the future, we want to build in a seamless rapid transit system. That could be buses, it could be trams, it could be light rail – or it could still be trolley buses! Anything chosen with rubber wheels could take any one of those routes, but anything chosen with steel wheels is going to need to take one set route and so we need to get that route right. While a solution with buses (like we have now, but possibly bigger, taller, longer, or faster) can continue happily down Lambton Quay, a solution with steel tracks may be better suited for one of the other routes, e.g. down Featherstone of down Customhouse. We need to have a route that we can use while we are building any new route, as constructing a new route does not mix well with keeping the current route running. And we need to avoid a pinch point that glues up the city!

Watch this space – we’ll be looking at some of the other issues involved in selecting a route through the city.

All images by Guy M

Meantime, next time you’re in Wellington, have a look around. What do you think about “mass transit”  down one of these streets?

4 comments on “Lambton – the Golden Smile”