Friends of the landlords – Wellington Councillors against affordable housing

Guest poster Frank McRae on Wellington city councillors’ recent decision to can the Special Housing Areas, which had been talked up as part of the solution to our housing crisis (and talked down as undemocratic).

This piece was originally posted on Greater Auckland – reproduced with permission.

Wellington’s housing crisis has dramatically worsened over the last few years with rapidly rising rents, record low listings, and lines down the street for flat viewings. Remarkably then Wellington City Council has just voted, against the advice of their own experts, to remove eight key Special Housing Areas which were setup to help ease the city’s housing shortage. This is a move that will ultimately make it harder to build the houses needed to fix Wellington’s broken housing market, exacerbating the city’s affordability crisis and the social problems that come with it.

In August 2017 nine Special Housing Areas (SHAs) were established across Wellington City. These would allow for the construction of more homes in specially selected areas to alleviate the city’s mounting affordability problems. The nine SHAs were located in the suburbs of Mount Cook, Te Aro, Thorndon, Johnsonville, Woodridge, Glenside, and Churton Park.

In 2013 the government passed the Housing Accords and Special Housing Areas Act. The aim of this legislation was to boost housing supply in areas with significant affordability problems. This legislation correctly identified overly restrictive planning rules as a barrier to boosting housing supply, and allowed for the establishment of Special Housing Areas in areas with appropriate infrastructure and a demonstrated demand for residential housing.

SHAs do not provide “carte blanche” to developers. Developments are still required to go through a consenting process but SHAs generally give development an easier path with:

Public notification may seem like an innocuous means of transparency but it is not really about informing the public. In practice it hands objection rights against development to every member of the public. Full public notification allows any person to submit against a development for almost any reason. And any person who submits then has a right to be heard in an official hearing process. Further, once a resource consent decision is made following hearings, submitters have a right to appeal the decision to the Environment Court. This all adds significant cost and uncertainty to development, and ultimately when costs and uncertainty are too high then developers just won’t attempt to build at all.

In SHAs, notification and the objection rights that come with it, are generally limited to adjacent property owners and infrastructure providers. This reduces costs and uncertainty for developers, but still allows those directly affected by development to have their say.

Perhaps the most important aspect of the SHAs is that they provide a presumption that these areas will be developed for housing. This contrasts with the usual District Plan approach which, in practice, assumes that the city will retain its existing form and assesses potential developments against its impact on that.

The Wellington SHAs were due to lapse in August 2018. Council planning staff recommended extending them to September 2019 at which point the special housing legislation would expire. In a 7-8 vote Wellington’s councillors voted against continuing all except one SHA, the Arlington apartments in Mount Cook.

Of the eight SHAs voted out, the three most significant were Adelaide Road in Mount Cook, the Johnsonville centre, and Te Aro at the southern end of the CBD. The Adelaide Road area in particular is worth a closer look.

The Adelaide Road SHA is notable for being an ideal area for intensified urban housing. It meets all the conditions for creating a quality, sustainable urban development.

It is a large area. It is located on the fringe of the CBD on a high frequency bus route that may convert to light rail in the future. It has access to abundant open space with the city’s town belt network adjacent. It is proximate to the universities, hospital, and a number of schools. The existing “character” of the area is visible in the image below. 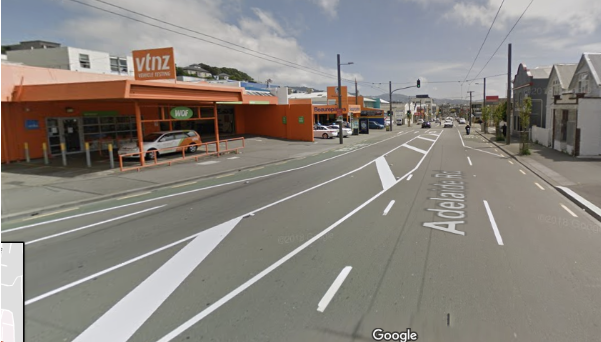 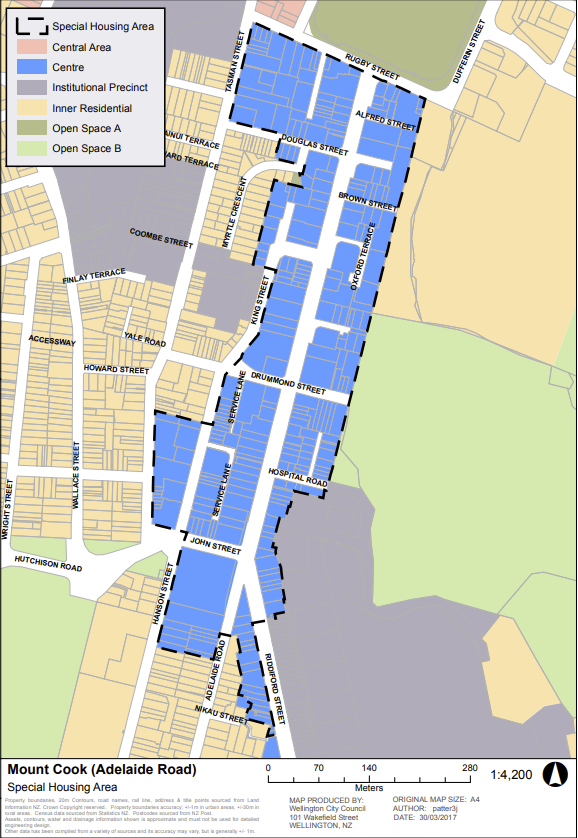 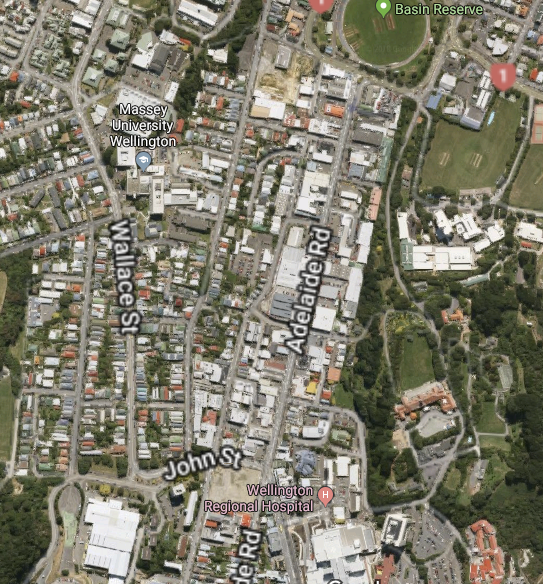 Adelaide Road, Mount Cook and its surroundings. CBD proximity and an abundance of open space

Councillors Calvert, Calvi-Freeman, Foster, Free, Lee, Pannett, Sparrow, and Woolf all voted against continuing Wellington’s eight Special Housing Areas. Most hypocritically of these were the three Green Party councillors: Free, Lee, and Pannet. The three Green Party representatives voted against the SHAs despite the fact that these would enable the city to grow in the most sustainable way possible, and despite the social justice issues that stem from unaffordable housing. 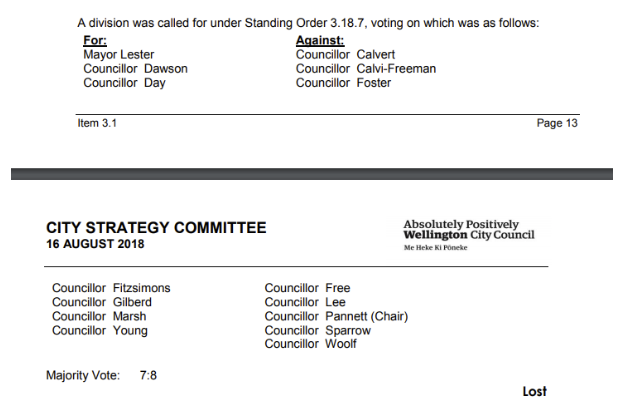 Friends of the landlords: the eight Wellington City councillors who voted against affordable housing

When pressed, the councillors provided a variety of reasons for voting down the SHAs.

Councillor Pannett argued that “Wellington can’t accommodate endless people”. This is despite the fact there is no link between construction and the number of people that exist. People don’t go away when you restrict construction, they are just forced into greater hardship. Also Wellington doesn’t need to provide for “endless growth”, just enough to keep up with its moderately growing population.

Councillor Pannett’s claims about infrastructure and green space are strange given that all Special Housing Areas were required to have sufficient infrastructure as a condition of them becoming SHAs, and Wellington City has an abundance of green space. This can be seen in the aerial photo of the Adelaide Road area above.

Pannett also claimed that the SHAs would somehow present issues for climate change. It is unclear whether she is referring to the environmental impact of the developments themselves or their vulnerability to sea level rise. Neither are valid concerns.

By enabling more compact housing in central locations the SHAs will allow more people to reduce their auto dependence and energy use. The alternative to building in these central areas is to build in distant suburbs where people will drive more and live in larger, more energy intensive housing.

Councillors Free and Lee claimed that instead of building more houses we should look to utilise the city’s empty homes. There is no evidence that Wellington has an unusual number of empty homes (other than perhaps in earthquake prone buildings) and even if there was it is not clear how they could be utilised to help solve the housing shortage.

Councillor Calvi-Freeman had concerns about preserving the sanctity of the existing Wellington District Plan, despite that plan being 18 years old and thoroughly ill-equipped to enable sufficient housing growth.

Another common refrain of the councillors was that the SHAs were “undemocratic” in that they provide reduced means of objecting to and appealing development. As far as objection rights against development are a democratic right, they are one that conflicts with other democratic rights, like the right to adequate housing, and the rights of landowners to use their land as the see fit. Further, there would be nothing “undemocratic” about special housing areas established by a democratically elected central government and the vote of a democratically elected city council.

Finally, a number of councillors claimed that the SHAs haven’t provided enough affordable housing yet to justify themselves.

Any single measure to improve affordability is going to do so incrementally but that doesn’t mean that we should cancel something that makes it easier to add housing just because it hasn’t instantly solved the problem. That would be like shutting down a soup kitchen because it hasn’t solved world hunger.

The politics of housing

The reason city councillors vote against measures that would improve housing affordability is that the people that vote for and lobby them tend to be older, richer, and home-owning. Councillors do not generally represent the interests of the young, of renters, of the less well-off, because these people tend not to participate in local government politics.

However, this need not always be the case. Auckland’s politics was firmly captured by home owning interests until younger people started taking notice. Efforts like the Spinoff’s War for Housing, the Coalition for More Homes, and the work of Generation Zero, helped shift Auckland’s politics towards better housing policy. Now that the housing crisis has spread to Wellington similar efforts are needed.

Special Housing Areas are not perfect, nor are they a complete solution to the housing crisis on their own. But they are considerably better at enablinging homes to be built than the status quo of the District Plan. Our unaffordable cities need to provide much less restrictive planning rules and a presumption in favour of development in inner areas if they are to have any chance of building the houses they need. In voting against the Special Housing Areas, Wellington’s eight councillors have unfortunately set Wellington in the wrong direction.

With thanks to our friends at www.greaterauckland.org.nz where this was originally posted.