With thanks to Matt L and the team at www.greaterauckland.org.nz for permission to repost.

It’s been a while since there were any major updates on the Let’s Get Welly Moving project, so I had a look at their website to see whether there had been any major progress since the options that were announced late last year. The main bit of progress is some interesting reporting back on the public consultation that was undertaken on these options, but first a bit of context.

Let’s Get Welly Moving is the piece of work following on from when the Basin Flyover was declined resource consent back in 2014. It is a joint project between NZTA and the local councils, kind of a mini-version of the Auckland Transport Alignment Project.

It’s fair to say we were not impressed by the options presented late last year, basically because it felt like a giant exercise in clever marketing of roading projects. If I was to sum up the general approach in Let’s Get Welly Moving, it would be “let’s build a heap of new roads to improve public transport, walking and cycling.” For reference here’s a brief descriptions of the different options they’ve been looking at, each on building on the last:

A. Prioritise public transport, walking and cycling in the central city

B. Scenario A PLUS better connections to the east and south

An extra Mt Victoria tunnel and separating east/west traffic from other movements at the Basin Reserve would deliver faster and more reliable public transport connections, including mass transit (which could include light rail), to Newtown and the airport.

C. Scenario B PLUS less conflict with traffic and redevelopment opportunities in Te Aro

D. Scenario C PLUS better access from the north, and less waterfront traffic

An extra Terrace Tunnel would improve access to and from the north and reduce traffic on the waterfront quays and through the central city, making it easier to access the waterfront.

There’s a lot of good marketing in the description of those options. Take Scenario D for example: 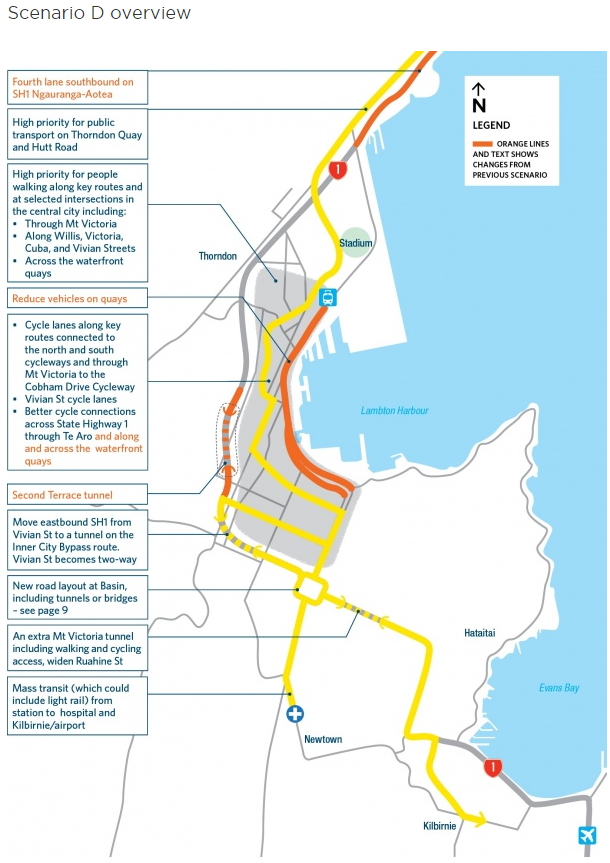 If you read the text, you’d be thinking that this option is all about public transport priority, walking improvements, cycle lanes and potentially light-rail. In fact it’s three new road tunnels costing billions of dollars and the “possibility” of light-rail.

Scenario A is probably the only one with a fair description. It actually focuses on improving walking and cycling in Wellington’s central city. But no mass transit for some reason – I guess that doesn’t fit with the “you can have mass transit but only if you build heaps of road tunnels first” approach. 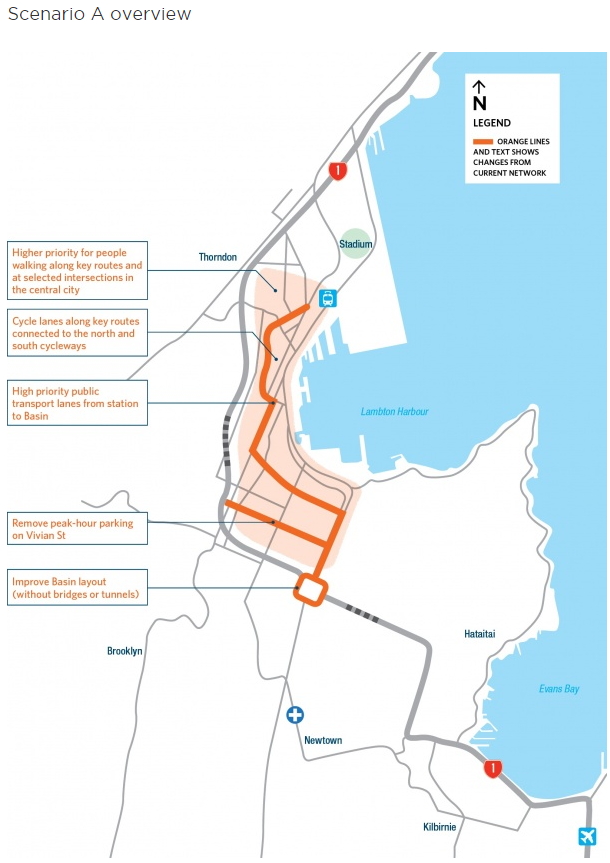 The results of the public feedback are interesting, because they suggest large parts of the public have seen through this fancy wording. On the other hand, a large number of people seem to want the “everything option” – which I imagine comes with a fairly hefty price tag. 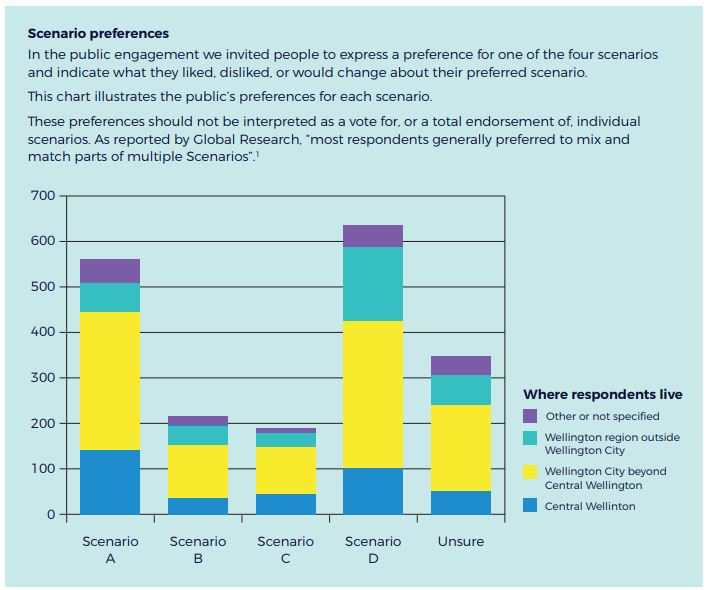 Options A and D really stand out, although it’s interesting to note a lot of interest in mixing and matching the scenarios. So if you dig a bit deeper, what elements are the most popular? 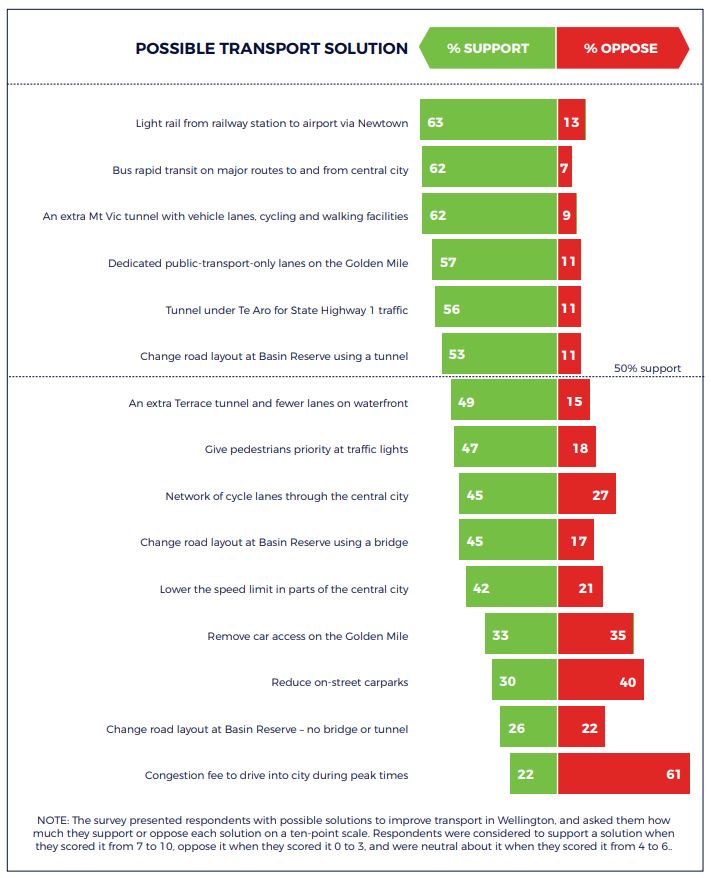 So very strong support for rapid transit, be it bus or light rail. Strong opposition to congestion pricing and quite a lot of support for some of the other bigger investments. Sounds like fairly typical “we want everything but we don’t want to pay for it” feedback that happens when you don’t force people to make trade-offs in their submissions.

A recommended programme is currently being developed and was meant to have been released by the end of August. It will be interesting to take a look at that programme when it comes out, to see whether it really reflect the government’s new transport priorities, or whether it continues the “clever marketing” language of earlier stages. It will be especially interesting to see how much the preferred programme costs and whether it’s affordable and value for money. This means some tough decisions will need to be made:

Wellington’s urbanism has stagnated over the past decade, resting on its laurels while Auckland has come on leaps and bounds. Which way Wellington goes on these questions will be critical to its way forward.

Thanks again to Matt L and www.greaterauckland.org.nz for content and permission to repost.

What do you think, friends? Have your say in the comments below or tweet us @TalkWelly