In the second part of her rhapsody on road rage, guest poster Becs Tetley talks balancing out the bullying behaviour…

As a Wellington CBD resident, I never considered buying a car, preferring to find my way around on foot, by bus, or sometimes an Uber. My flatmate has a car that I sometimes borrow. But my fear of pissing someone off has led to an excessive friendliness when I drive so I don’t trigger another drivers pent up fury simmering below the surface.

“You gave that guy a double wave,” my partner said as I thanked the driver opposite for letting us merge into the lane. It was one of the rare occasions when I was behind the wheel and he was the passenger. I giggled a bit to myself but realised I was overcompensating. I’m so committed to not having any sort of conflict that I’m willing to be polite repeatedly in case that guy didn’t see it, or if in the second and a half since my last wave, something happened to piss them off. This feels a little extreme. Perhaps I’ve swung too far the other way. 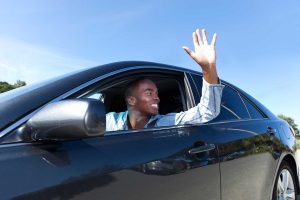 Surely there must be a middle ground here, because a lot of what’s happening out there as we drive are genuine accidents. People are fallible and we’re all operating in a slightly different way. Can we have a little more compassion and understanding? Can we pretend that the other person in that car is someone we love?

Recently my flatmate test drove a Jeep that had an auto-parallel parking function. It took ages to activate, as the car scanned the space we were meant to park in, but once it worked it out, the car reversed into the space so fast, we both yelled like children, terrified of an accident we had no control over. The parking job turned out perfect, but we were left feeling rather uneasy.

People often talk about the technology of self-driving cars, that it’s getting better every day, and will be a reality for us soon. But I wonder, are we ready for that sort of innovation? Where will our bubbling anger go when we are no longer allowed to take it out on the faceless drivers around us? Can we imagine our cars fighting those battles for us, robots shouting at one another, giving each other a mechanical finger as we humans sail by one another, powerless to control the situation? 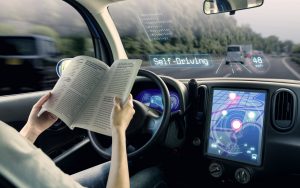 Or can we programme those robots, and perhaps ourselves, to be a little bit more forgiving, a little bit slower to anger and judgement? Robots can learn to self drive cars, can we as adults learn more self control? Can we remember that there are toddlers learning to walk, tweens attached to their headphones, less mobile people just trying to get by – fragile humans threatened by half-tonne machines.
In the meantime, I’ll just be here, another pedestrian on the sidewalk, waving and smiling like a maniac to level the battle ground.

How can we moderate our behaviour better in these tin cans? Do you overcompensate when others are getting in a frenzy? What do you think about self-driving cars? Let us know!