People around Levin stand to have their homes bought by force because they’re in the way of a new expressway. Talk Wellington ponders the local reactions when a local landscape is changed in the greater good – and features a post from a vastly different conflict environment

NZTA is building the next stage of the Road of National Significance, Ōtaki to Levin. It’s going to be big – it’s State Highway One, and “once connected to the Transmission Gully motorway, is expected to take traffic from Wellington to north of Levin without hitting a traffic light or going through any towns”.  There’s a shortlist of route options, but all of them will put the big (very big) road where people’s houses now stand.  On land being enjoyed for lifestyle, or used for businesses, or just plain loved.

Landowners have had letters, as Stuff reports (more coverage linked there), and while NZTA has been put in its place by the courts about taking wahi tapu land, the question is now which private properties will go.

Some of us at Talk Wellington expected more bitter protests…  there are definitely some really unhappy landowners, but nothing resembling the long and intense protests in Kāpiti from 2011 to 2016.

The lively and indefatigable Kāpiti Expressway opposition, here protesting at Parliament back in 2011 (Andrew Gorrie/Dominion Post)

Perhaps they’re working up to it? Or is it just that there are fewer residents there to suffer than in Kāpiti? Or perhaps they think their case is weaker in blocking a project that’s promised to bring so much: congestion relief, rescuing Levin from severance, and improving driver safety?

Let’s contrast this with another protest at the nose of the Fish’s Head: down in Island Bay, the cycleway opposition continues to bring joy to the suburb (or at least a feeling for the rest of us, of having dodged a bullet).  We feature a thought-provoking post by Island Bay Cycleway that highlights some of the vitriolic, frankly disgusting behaviour when the landscape is changed, allegedly in the public good.  Is it just like the expressways?

When should we expect anger  – lots and lots of it? And when should we accept and even condone really bad behaviour by people “fighting The Man”?  Kiwis tend to think of ourselves as more restrained than Americans when it comes to screaming and yelling (no 50,000-people rallies with T-shirt cannons for us thanks).  But are we actually more civilised?

Here at Talk Wellington we’ll look more at lots of different examples of people’s angst versus the changes proposed and the actual implications for people – both good and bad implications.

But for now enjoy Civics and Civility with an eye to the Levin to Ōtaki situation – people being forced to move – and the ways they are expressing their opposition.

Godwin’s law reared its ugly head in Island Bay this weekend, but not for the first time

It’s been hard to avoid the fall-out from the Island Bay Residents Association’s protest march at the weekend. You can read The Dominion Post’s report on the march here and Radio New Zealand’s report here. Wellington City Council also issued a correction of some incorrect reporting here.

Unfortunately, at some point between the end of the march and early evening Godwin’s law came into effect and as reported by the Dominion Post a Nazi sign taken to the protest was put on by-election candidate Fleur Fitzsimon’s fence. The story was also picked up by the New Zealand Herald ‘Return of the Third Reich’ sign put on Wellington Council candidate’s fence, the Otago Daily Times Council candidate victim of Nazi slur and Newshub Anti-cycleway protester compares opponent to the Nazis which hardly seems like the kind of publicity the residents association were looking for. 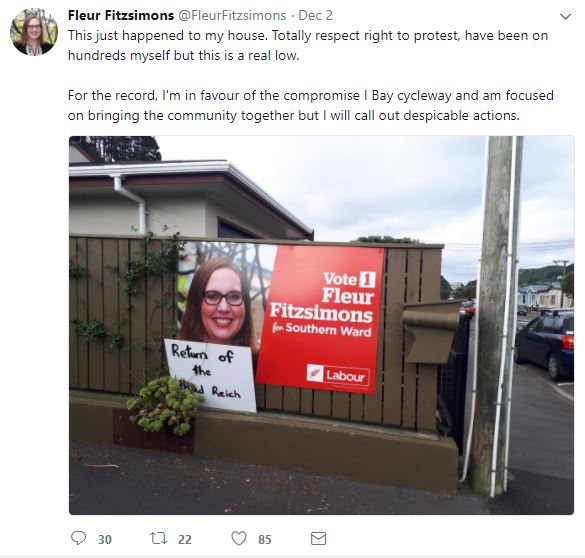 Image via Twitter
​I obviously agree with Fleur that this was a stupid and disappointing act. The sign shouldn’t have been on the march in the first place, especially not when it was being carried by the husband of the Chair of the Island Bay Residents Association. It’s disturbing that apparently not one other person at the march thought that the sign was inappropriate and should maybe go in the bin. 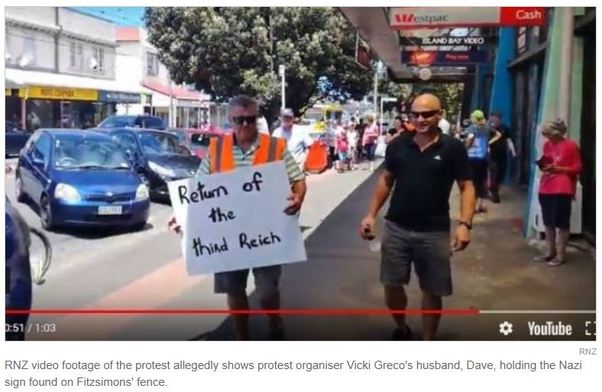 However, I see things a little differently to Fleur when she says we need to “bring the community back together”. I’ve said many times that I don’t think the cycleway divided Island Bay, it simply revealed the diversity that was already here. A desire to “bring the community back together” could be seen to imply that it was united in the first place. I don’t think it was united so much as it was unchallenged, although debates about the seawall, marine reserve etc showed some cracks. A desire to “bring the community back together” could also imply that diversity of views is a ‘problem’ that then needs to be fixed. But people should be able to disagree. In fact, it can be very healthy to get outside your bubble and be challenged by different viewsI see the real problem here as one of civics and civility i.e. it’s why and how we are disagreeing with each other that’s the issue. First, too many people don’t seem to understand and respect the way local government decision-making actually works. Second, we don’t always seem able to engage in a debate in a civilised way. That’s what we really need to fix and that’s where we need to see greater community leadership.

And this is where it gets a bit tricky. Fleur is right that “this kind of messaging is totally unacceptable” but the uncomfortable truth is that this type of rhetoric is not new.  In my opinion the tone of the cycleway debate in Island Bay was established and then enabled over a number of years primarily by two people; ex-councillor and current Rongotai MP Paul Eagle and current councillor Nicola Young. Paul and Nicola both used language and tropes throughout the cycleway debate that in my view were often inflammatory and inappropriate. For example, Paul Eagle has previously used the Twitter hashtag #WCCGestapo to refer to the former Mayor, council staff and cycle advocates. 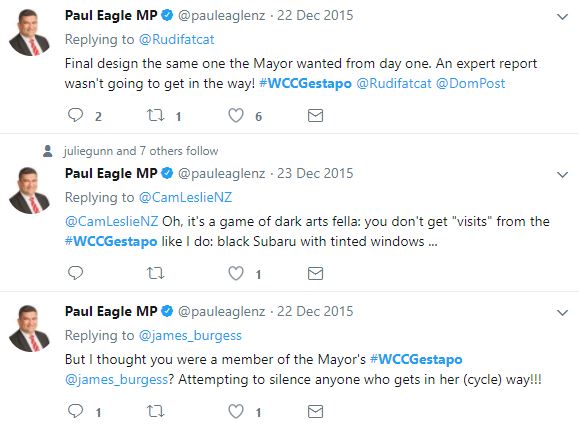 In another example Nicola Young compares the handling of the cycleway to “the Soviet occupation of Berlin after 1945”. I also remember ex-councillor Ray Ahipene-Mercer referring to the “Green Taliban” during one council debate on the cycleway (that one will be on YouTube).When community leaders use language like this is it any wonder that community members feel they have license to do the same? In this particular case I suspect that Fleur, as the Labour Party candidate, is on the receiving end of some anger in the Island Bay community regarding Paul Eagle’s previous behaviour. Ironically, this includes his recent vote for the cycleway compromise which has been largely seen by cycleway opponents as a betrayal (for example in this Cook Strait News story on Vicki Greco’s election campaign).

So if we really want to get Island Bay back to somewhere better I think we should focus on civics and civility and not some utopian ideal of “community” where we all think and act as one homogeneous hive-mind. I suspect that’s what people who want to “bring the community back together” really mean anyway. In fact, Fleur subsequently clarified her own comments:

The point is you can’t repair something unless you’ve correctly diagnosed what the problem is in the first place. I think we need to be much more honest about what really fuelled the “division and tension” in Island Bay and that includes demanding much higher standards of behaviour from our community leaders. That also includes the organisations they belong to holding them to account. I applaud Mayor Justin Lester for his unequivocal statement about the Nazi sign that “I’d expect better standards from anybody who is elected to council, or running for council, or even aspiring for council. I’m disappointed by the behaviour”. However, I have to wonder why Wellington City Council and the Labour Party a) never called Paul Eagle out on his own behaviour and b) actually seem to have rewarded him for it. There’s a clear double standard at work here. As long as we’re demanding apologies from people perhaps a sincere apology from Paul for his own behaviour over the past few years would be in order.For my part, I still stand behind every word I’ve written across the Island Bay Cycle Way website, Facebook page & Twitter, and it’s all still there for public scrutiny. I’ve certainly disagreed with people in the past but I’ve always tried to do it in a respectful way with my reasons fully explained, just as I have tried to do here. But that doesn’t mean I haven’t screwed up at some point and it’s true that I’ve been accused of ‘social media bullying’ in general terms on a number of occasions, including by Paul Eagle himself [Note 1].

Image via Twitter
​The interesting thing is that I’m yet to receive a single complaint about anything specific that I’ve written, the accusations have always been framed more broadly as “you’re a social media bully”.  I’ve had plenty of positive feedback too, including being nominated for an NZTA Bike to the Future award, so I feel like I must be doing OK overall.
[NZTA 2017 Bike to the Future Awards image]

Regardless, if anyone has specific examples of when they think I’ve over-stepped the mark then please let me know. I will definitely take any issues raised very seriously.Regan

Paul’s accusation that I have been the “catalyst for lots of hate” towards him and his family is wide open to interpretation. On the one hand he could simply be highlighting that my criticism of his position on the cycleway led to others behaving inappropriately towards him and that might even be true. A less generous interpretation is that it was an attempt to use his position of power to try and publicly shame a constituent who hasn’t actually done anything other than disagree with him.

I actually had the opportunity to discuss this with Paul in person in November 2016. The meeting was very amicable and when I asked him if he seriously believed that my criticism of him was illegitimate  or that I should be held responsible for others’ criticism of him of course he said no. He understood that as an elected representative he should expect his position on any matter to be publicly critiqued. He agreed that although what I had written often made him feel uncomfortable that I was well within my rights to say it. That tweet is still on his timeline though.