The much-anticipated announcement came this week: a significant investment by government will refurbish and revitalise the extensive state housing areas in Porirua. We’re hoping those in charge will bring the kind of progressive mindset that’s historically driven Porirua’s better places to live.

Once the heart of Ngāti Toa Rangatira’s rohe, the land around Porirua’s two beautiful harbours is almost unrecognisable today.  It now supports 51,400-odd people (from the original few thousand), the very shape of the hills, stream beds and coast are different, and next to nothing remains of the original bush.

So far, so familiar – it’s the tale of many Ao-NZ towns.  (Except perhaps for the reclamation and earthworks – humans have dramatically changed Porirua’s coastline and landforms. This is a fascinating read and this. And browse through photos here!) 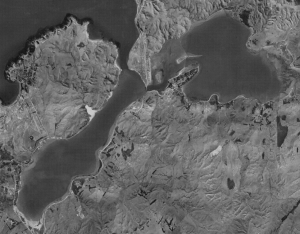 1942 Porirua from the air. The bush is all gone but the harbours still retain their natural shape (notwithstanding the bridge at Mana). 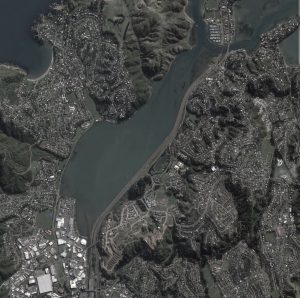 Onepoto arm of Te Awarua-o-Porirua 2017. Check out the straightened coastline for the highway, major reclamation at the harbour’s head, and much much residential development

From its arguable heyday in the 1950s as a socially mobile area where it was full of working people earning well and enjoying good living standards (harder if you’re Māori), Porirua has become a city of two halves.

Some areas are firmly decile 10 and affluent. This includes some older ones (Plimmerton) and new ones (Aotea, new Whitby, Silverwood).  Other areas are notoriously high in unemployment and social deprivation. These include many of the state housing areas that not too long ago were proudly shown off to a very fresh-faced royal couple. 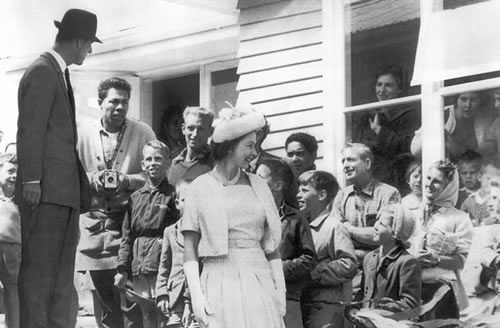 Even in 1963 though, while the well-built state houses were solid, Porirua’s new suburbs were often socially and physically isolating for anyone not in a nuclear family – a phenomenon affecting many new suburban areas at the time.

While their population was low so congestion wasn’t a thing yet, the new suburbs’ car-centrism meant you couldn’t get out without significant inconvenience – even to the train station that was part of the reason for modern Porirua’s establishment.

Poor accessibility and mobility – and cars being the only feasible way to freely move around – are a big deal. Even in the affluent bits of Porirua, the layout of the housing and roading means you have to  jump in the car to get anywhere or do anything. Even get a loaf of bread and an icecream – yes, the houses may be worth $750,000+ but the streets miserably fail the Popsicle Test.

This is transport poverty, baked in – it’s just the household incomes are high enough to absorb it.

But where they’re not, it’s a miserable cycle of spending more than you can afford on running a car to do the basics of life.

And it’s especially hard to live in places like this if you’ve got a young population like Porirua or an old population (here’s looking at you Waikanae). Even if we can afford to drive everywhere, we can only do it for some of our lives.  What do we do for the rest of the time? Suffer? Move?

Mobility vs accessibility and the Big T G

It seems we’re still rather obsessed with mobility (and plain old roading) to the detriment of accessibility.

The DomPost piece was (visually at least) as much about Transmission Gully as it was the homes and land!
Now there’s no mistake: Transmission Gully’s a big deal. It’s been called for since the 1980s (ever since this author can remember). Calls have strengthened as the car-focussed suburbs north of Wellington have grown, public transport investment has atrophied, and (surprise!) traffic has grown considerably. It’s definitely got some resilience benefits which are important.  But where it comes to how to arrange transport and landuse, NZTA, the wider public and successive mayors seem to share a tacit view that TG will Fix All The Things:

“If the TGP is not progressed then congestion will worsen, journey times along the existing SH1 corridor will increase up to 30% by 2026, and there will be increased driver frustration and accident rates at peak times.”  (NZTA, a brief “we’re stating the obvious” line in the intro to the business case for a PPP for Transmission Gully)

“Porirua Mayor Mike Tana says once open, the link roads and the Transmission Gully motorway will bring a wide range of economic and transport benefits to the local and regional community.  “We’ve got plenty of room to expand and these new roads will make many locations easier to get to, providing access to new growth opportunities.” – NZTA press release.

But for people living in Porirua, the big question is whether the revitalisation plus new roads combination will just see the socially-isolating dormitory layout spruced up and made warmer, and drier, or whether there’ll be some genuinely “healthy streets” thinking applied.

What does “healthy streets” mean in this context?

We desperately hope there will be this stuff, because if there’s anyone who deserves something to be working in their favour it’s the folk of Eastern Porirua’s state housing areas. 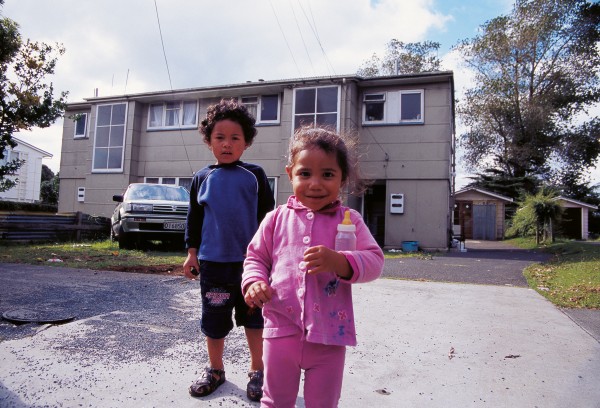 Hope on the horizon!

We’re really glad to hear Homes Land Community (formerly the Hobsonville Land Company) is going to run this revitalisation. Now encompassing the team behind the  ground-breaking Tāmaki Regeneration Project, they’ve got a wealth of great experience and the large-scale redevelopments they’ve been doing in Auckland look frankly fantastic.

While there are some grumps about mobility (there’s a harbour between them and the city centre), Hobsonville as a place to live is textbook great. 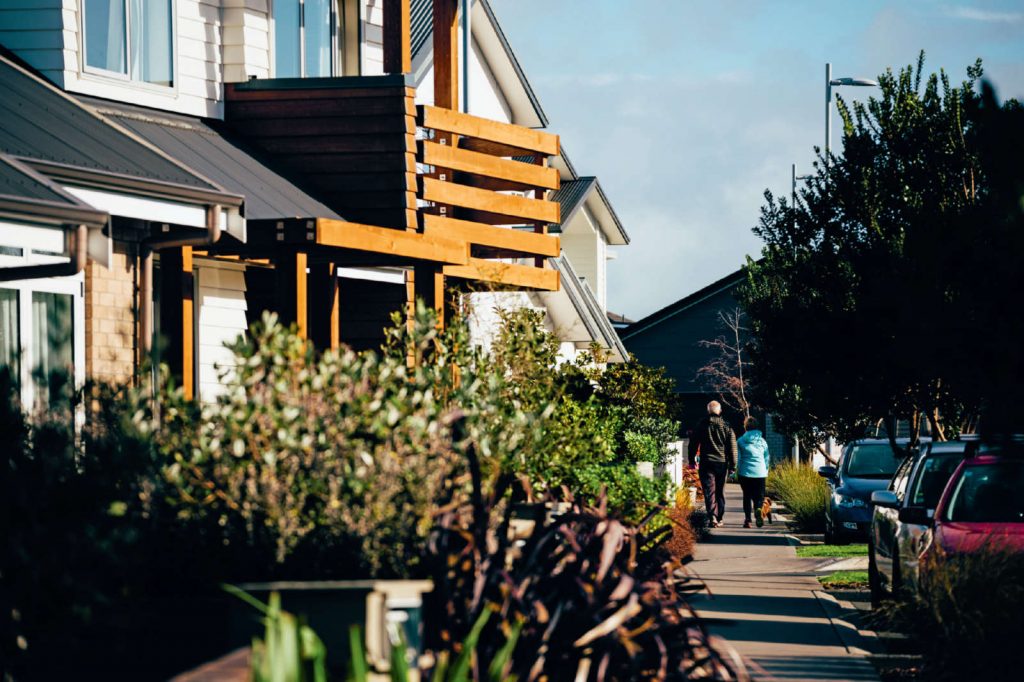 So hopes are high for Porirua!

And wouldn’t it be delightfully ironic if Porirua’s poorest and blue-collar suburbs could show the way for the affluent developments: people-centric streets, community-focussed neighbourhood layouts and medium-density done well.  Demonstrating the quality of life that should be every Kiwi’s right – but which our new expensive suburbs seem to have decided we don’t need if my nuclear family has four bathrooms, a rumpus room, internal double garage and 600 square metres of house.

Aotea and new Whitby, for example – sorry, new Whitbyites and Aoteans, but these suburbs are for the most part unbussably-designed monocultures of internal-double-garage McMansions.

To maximise ease of building (“steps to one’s house are so third-world”) the landforms are earthworked beyond recognition, with literally all the vegetation removed so people move in with nary a stick of green. And once in, no-one will plant a big tree despite their benefits, because there’s no space, plus the psychology of loss and neighbour conflicts will create more trouble than you can stomach.

In these desirable new suburbs – “A Lifestyle Within Reach!” – residents have to call for a primary school to make some central heart for their suburb. 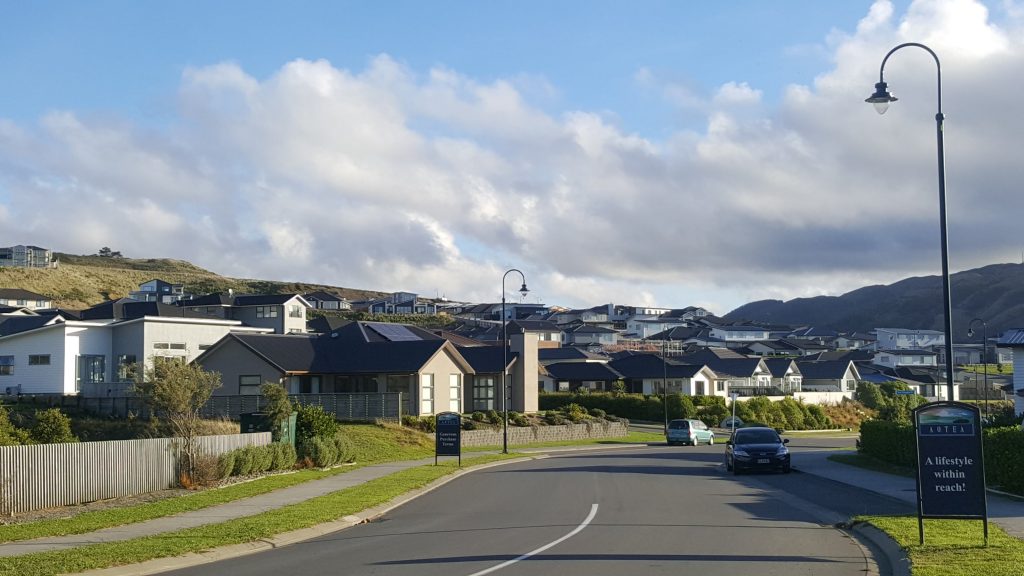 Aotea – Lots of flat sections (earthworks), lots of site coverage, and LOTS of public and private space for cars. The strongest community space here is online. “A Lifestyle Within Reach” indeed, but is it really a rich one?

Developers do awfully well off these (as do real-estate agents who happen to be city councillors), making in the order of 20% profit per section.  That’s cool, good for them.

But we hear from developers (or at least that councillors tell us they hear): don’t try to encourage us or make us provide anything else because “there’s no market for anything denser, Kiwis don’t want to live in it”.

Hobsonville is soundly proving this to be complete bollocks. And even with Porirua’s much weaker population growth there’s absolutely no reason why Porirua people don’t deserve this experience from the place they live.  If the private market can’t make enough profit off this, we need to fix the market.

Things we can do better right now

When you own the land the buildings are on, and you own the buildings themselves, that’s when it’s easiest to fix bad development. Retrofitting badly-done suburban settlements is really hard and expensive – while being crucially important –  so don’t hold much hope for quick fixes of Porirua’s newer, privately-owned developments.

But  when you’re the owner of all of it,  as with the state housing areas, things are a lot more straightforward. It’s still hard and complex work, but everyone’s incentives are broadly pointed in the same direction: making the urban fabric give people better living experiences.

For the first time since the 1950s, Porirua’s places to live will be really serving the people who live there. There’s a chance that as well as warmer, drier houses, people-centric streets that let our kids live longer will also be the future for Porirua – Titahi Bay as well as the East.

Here at Talk Wellington we – and especially our Porirua folk – are all like:

What appeals and doesn’t appeal about life in suburbs?