Collected insights and reflections about recent transport-related news  – your regular food for thought.

Back on the buses

“Students … have spoken out about dangerous overcrowding on buses (described) as like a scene from a Japanese train station.”

Nope, not Wellington this time. This was the opening to a story in the NZ Herald during the last week about some of the bus-related issues that Auckland has also been in the thick of recently.

It’s a good reminder that we’re not alone when it comes to the trials, troubles and tribulations of arriving at bus services that work for everyone.

Wellington headlines have continued unabated in conveying what Jamie Adams of the Cook Strait News recently termed “the fallout over Metlink’s much-maligned bus network”.  Headlines like:

Some informal vox pop views gathered by the Talk Wellington crew has turned up one possible bright spot being that city workers from the South (Island Bay) are mostly getting to work on time.

One punter was positively effusive: “The new buses are great – I don’t even check a timetable. I can run to the bus stop after walking kids to school and there’s a bus right there. Just as many people, maybe more, but I get a seat – and bonus, I get to feel like a kid when I sit up the top!”

The large meeting hosted by action group ReVolt in Newtown yesterday (Sunday) will hopefully be well reported on, and the group have also lodged a petition on the NZ Parliament website to fix the network.

Local MPs have been wading in, with National list MP Nicola Willis the latest to organise a public meeting – this one to be held in the Karori Community Centre on Thursday 30 August.

As reported by the Independent Herald, before organising the meeting Willis first ran an online survey that drew more than 650 responses: 84% expressing dissatisfaction and 73% giving an indication they would be less likely to use a bus than they were before. (See also Uber drivers cash in)

The Greater Wellington Regional Council’s ‘mea culpa‘ was accompanied by the interesting news that it would be reinstating the off-peak Miramar-Karori service, which connects Massey and Victoria universities as well as Wellington Regional Hospital. A timeframe for other potential changes and review of timetables and capacity on core routes is being given urgent attention.

It was also interesting to get some insights into the life of global transport planners by reading a thread on Twitter over the weekend by Jarrett Walker/@humantransit in response to some public ire arising from changes being mooted for Dublin’s bus network.

The thread states Jarrett Walker’s point of view “that no matter how much consultation we do, we’re told we didn’t do enough… at some point. you have to say you’ve done what you can”. Here’s an excerpt worth pondering: 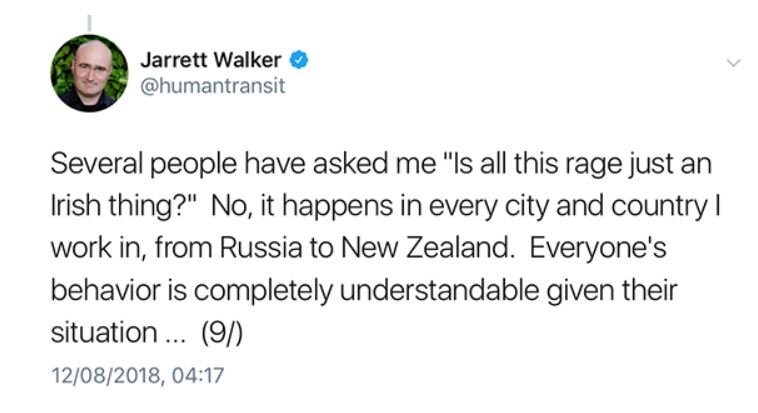