Four themes from the transport week in the media…

The regional fuel tax that has kicked off in Auckland over the last week – and that Wellington has expressed interest in too – has been providing necessary fuel for thought, including differing assessments of the ‘average’ pain on households.

In coverage by the DomPost, Auckland University biostatistics professor Thomas Lumley put the record straight with the straightforward observation that any user charge is going to take “a lower proportion of income for wealthy than poor households”.

A similar point was made that for families relying on older and less fuel efficient vehicles, the cost is higher. Regardless, the payoff to the Auckland Council is set to be an average $12.5 million per month as collected and administered by the NZ Transport Agency, with the companies distributing petrol to consumers now being liable for the tax of 11.5 cents on every litre of fuel they sell.

For Wellingtonians keen to avoid petrol taxes the public notices section of the DomPost offered up news last week that the Council has 34 sites for Residential Electric Vehicle Charging Stations in its sights.

An accompanying set of regulations are out for consultation now and until Friday 13 July with details at Have Your Say.

Do you think about getting a driver’s licence as a rite of passage?

This was part of the teaser to a DomPost feature article at the weekend just gone which dusted off the idea that a drop-off in the number of New Zealanders getting a licence – or even a vehicle – is tied into a worldwide trend.

Transport researcher Debbie Hopkins’ findings on this, as cited in the article, are that younger people are at least postponing getting a licence, with the attitude to cars being that they’re a “burden”.

Roger Venn, the general manager of the Automobile Association’s driving school, was given the last word in the feature with this interesting quote to ponder:

“We have a very high car ownership ratio… We’re a car-loving nation (and) we still have a high percentage of our population that lives outside any public transport”.

There are two things going on in that quote that beg further questions. One, (why) are we a car loving nation? Two, how can we reduce the percentage of people who can’t access public transport?

Toru: The wheels on the buses are spinning

Talking of public transport you may have noticed that Metlink is upping its promotional advertising spend ahead of the ‘new bus network’ kicking in from Sunday 15 July.

These are big changes, and it was good to see the Insight section of Saturday’s DomPost gave the new network a once-over by journalist Damian George – with attention given to the fact that many Wellingtonian’s daily routines will need to be adjusted and, as George wrote, not absolutely everyone will be in a better position.

The Greater Wellington Regional Council (GWRC) spokesperson on this was its general manager of public transport Wayne Hastie who reiterated what is obvious to anyone in the city, namely that bus-to-bus congestion along Wellington’s Golden Mile has been “more than double what the recommended number of buses per hour down a section of roadway like that (should be)”. Watching how and when that situation shifts, should be a lithmus test for the changes ahead.

The DomPost article also included a breakout box of the related promises being made – 45% more weekend services, 26 suburbs with more off-peak services, 15% more weekday services and, separately, a 68% reduction in emissions. As reported, the council also says 75% of people will be within one kilometre of a high-frequency bus route.

Another promise to watch closely is how fast diesel buses are given the heave-ho. 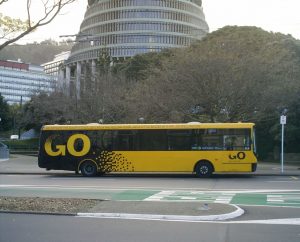 Apparently GWRC is assessing the merits of a proposal to replace up to 10% of the diesel bus fleet with full-electric vehicles each year from 2019, and ensure no new diesel buses enter the fleet – as detailed during consultation for its Long Term Plan. Aren’t the merits obvious enough?

After ReVolt Wellington aired mounting concerns about increases in the noise and pollution of diesel buses, especially given the number of diesel buses is expected to multiply when new operator Tranzit takes the steering wheel this month, Rongotai MP Paul Eagle is on record as offering to get a local group together to meet Transport Minister Phil Twyford about the concerns. Hopefully the DomPost will report on that too.

Not everything is going Metlink’s way: the price they face for using the Google Maps API for their journey planner just went from $1,000 a month to a whopping $30,000. Not surprisingly they’re looking for a new map provider.

Further ahead there are reports that Project NEXT is leading a rollout of fully integrated public transport ticketing with Wellington to be the first city off the rank in 2021, and the rest of the country five years after that. In reporting by Damian George there’s a note that the 2021 date is just a best guess.

He adds that very few countries in the world use a nationwide system, exceptions being the Netherlands and Switzerland. It would be good to see more information on how those systems operate.

Whā: Speeds down “to safeguard cyclists”

Kudos to the Kāpiti District Council and NZTA for taking speed limits down across a number of dangerous northern roads, including a section of State Highway 1, after a review that was prompted by public requests for lower speed limits for safety reasons.

As reported by Stuff’s Viriginia Fallon, the changes include reducing the speed limit on sections of Akatarawa Road, between Kāpiti and Upper Hutt, from 100 km/hour to 60 km/hour,  and likewise the Paekākariki Hill Road, with effect from 13 August.

Fallon notes that safeguarding cyclists was one of the key reasons behind the changes, which have been supported by the Cycling Action Network (CAN). As CAN’s Patrick Morgan said to Stuff, “It’s about having the right speed for the road”.

Is it coincidence that “drive slower” and “cyclists” are two things guaranteed to invoke outrage (and lots of comments and clicks)? There was lots of outrage on some Kāpiti social media about these rural road and state highway changes, but less than reported the previous week for a town centre road. There, a local’s survey of Kāpiti residents found widespread opposition to lowering the speed limit from 50km/hr to 30 (which was to come with a cycle lane) through the heart of Waikanae.