Let’s Get Wellington Moving 2: Voices from the Lands Out of Scope

Talk Wellington looks at how Let’s Get Wellington Moving deals with 82,000 of the people in the CBD every day. Spoiler alert:  they come from north of Ngauranga…. so sorry folks, you’re out of scope. 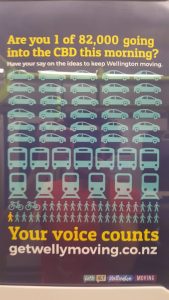 This smart looking poster is in lots of places this week – this (poor) photograph from a suburban train.

It’s great: encouraging people from outside Wellington CBD to have a say in Let’s Get Wellington Moving, that well-intentioned initiative to Sort Out Transport in Wellington (see part one).

It’s also kinda hilarious because it points to one of the great flaws in Let’s Get Wellington Moving: two little things called geography and people.

Geography flaw: the LGWM scope is firmly cut off at Ngauranga Gorge.

Its working title is “Ngauranga to the Airport”. Unfortunately, this means that out of scope is providing for the travel choices of the 82,000 people who descend on Wellington CBD from north of Ngauraunga everyday, i.e. 65% of workers in the whole region! That’s people with the CBD as their destination, and a relatively small minority passing through on their way to the airport, hospital etc.  Yes LWGM want us to have our say, but without intending to do anything about our travel choices when we leave home.

So the project is trying to sort out transport (movement through) in what’s fundamentally a destination (a city as a Place).  This tension exists in all cities, and is one of the greatest challenges for cities’ leadership.  But LGWM is setting itself up to fail by so badly mishandling it.

You could get away with only looking at Wellington CBD alone if the majority of people commuting from the “source” suburbs – from Kāpiti to Khandallah, from Pomare to Petone, Maymorn and Trentham and Porirua and Waikanae – are already using efficient transport. (Efficient means the greatest number of people for these trips are moved with the least energy-use and place-disruption. I.e. … efficient public transport.)

Spoiler alert…We’re mostly driving private cars for our commutes.  Despite public transport use that’s historically been better than the rest of “Jump In The Car” NZ  (thanks to investment pre-1990s), Wellington region’s public transport ridership growth has flatlined despite growing populations: we’re now consistently beaten by Auckland.  Auckland! “Just Give Us Moar Motorways” Auckland!

The reason: the way we’ve designed our suburbs, and what transport’s been supported with public money.

Decades of urban and suburban development have built us places to live that push us to use our own cars to get to town (Wellington). 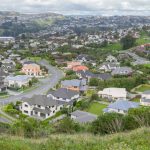 Churton Park, one of the many popular and car-dependent Wellington suburbs… and out of LGWM scope.. Photo courtesy of Ray White Real Estat

Decades of transport infrastructure spending (including investment in car parking) have given us a transport environment that does the same.

So yes, of course the majority of the Wellington region’s “north of Ngauranga” population (not to be confused with “Wellingtonians”) see it’s often cheaper, faster and more pleasant to drive your own car into Wellington.  Storing the thing in the city during the day is the only really hard bit (for us).

Geography and people Out Of Scope? Good luck with that, LGWM

In case it’s not clear why this is a problem…. much as we love cars while we’re actually driving, cities are about what you do outside the car: shop, eat, work, browse, meet, talk, drink, listen, play, wander, spend.   Storing lots of private cars is really terrible for the destination: cities as places for people, commerce, society and culture. This is the main reason why sensible cities are moving to minimise private car use in their centres (Auckland, Madrid, Oslo, Chengdu – the list goes on).

So poor old LGWM. The “Lands Out Of Scope” generate an influx of expectant private car drivers needing day storage for their cars, and thereby kneecaps LGWM’s ability to meet its great principles. Pretty much all of them. 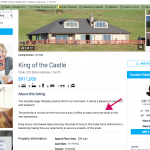 A screen grab from Harcourts advertising Ōtaki as “an easy commute south on the new expressway”.

And what are we left with? An initiative that fails to consider the transport needs of 65% of its working population, and chops off the destination CBD from many of its “source” suburbs, right from the get go.

Talk Wellington enquired about this at the Scenarios Reveal event on 15th November. Officials acknowledged that Wellington’s regional transport really needs sorting (which many smart people know), but couldn’t point to anything that gave us even a glimmer of hope that this would happen. Not the Regional Land Transport Plan, not the Regional Land Transport Strategy…  awkward silences abounded. As observers in Auckland are noting, Auckland’s version of this process had a proper geographic scope that included destinations and origins.  Why did they think it was feasible in Wellington to sort out the destination while ignoring choices at the origins of the trips?

More on this soon, including the implications for Newtown, but suffice to say … the “Lands Out Of Scope” are just another reason it’s starting to look like smart officials who should know better have offered Wellington a few expensive lemons for feedback.

So what’s an Out Of Scope citizen to do?

Your feedback can help  give LGWM a good shove – improving the odds of a better balance of destination and movement in our nation’s capital.

If you’re busy, save time typing the same stuff into all the wee boxes by skipping to this step  and:

and in the box, writing your riff on this theme: “Scenario A (walking, cycling) is a good start but it’s not nearly enough.

Fund and build mass transit to maximise usage before building any car-centric infrastructure.”

Well, for now… but here’s the other thing you can do as a citizen.

Tell them you want to see… some strong, progressive regional transport objectives set and met, so cities like Wellington can be good destinations for us and our kids.  Transport must support that rather than undermining it.

Whatever your reasons – a liveable and pleasant Wellington city, reducing climate emissions,  healthier lifestyles, leaving our kids a half-decent urban legacy… it all works!

4 comments on “Let’s Get Wellington Moving 2: Voices from the Lands Out of Scope”