July 15th bears down on us: the most sweeping set of changes to Wellington public transport since ages ago. The Hutt’s had a taster and for the rest of the region, the countdown continues.  In this bus-focussed special, Talk Wellington’s been reading the news with a critical eye…

There’s certainly been a lot of publicity, with a cheery “Hey” and plainer English than we’re used to seeing from Greater Wellington.  Cleverly branded “On Our Way”, there’ve been posters, newspaper ads, flyers given out at transport hubs and put on seats on buses and trains. Helpfully, Metlink’s “amBUSsadors” have been out in force helping people bemused by early changes and swapping old bus cards for Snappers. Hopefully this will help buffer the inevitable complaints and questions fielded by the call centre folk.

A fold-out guide inserted into the weekend DomPost also highlighted the main changes: new fares, new ticket types and changes to Metlink bus routes and times.  All, apparently, going to make things better overall – though they acknowledge some people will be disadvantaged. Damian George’s people-focussed roundup from May is worth a re-read.

The weekend’s publicity supplement also trumpeted the arrival of electric double deckers which will operate on the main north-south route in Wellington and which were officially launched outside Parliament on Thursday 5 July. 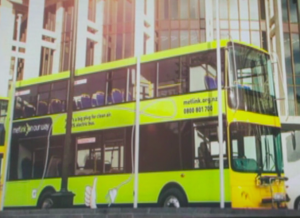 (No doubt people are hoping Wellingtonians will quietly forget the palaver over the demise of Wellington’s previous fleet of electric buses, the trolleys.  It was complicated, but messy too – and various politicians were answering questions.)

The fancy new buses did a special drive-by of the Beehive on Thursday, and as Parliament’s speaker of the house it was Trevor Mallard who gave permission.

But as a local MP he didn’t attend the event, citing his solidarity with bus drivers who may be facing potential hardship in the change-over in bus operators from NZ Bus to Tranzit.

Journalist Hamish Rutherford reported on Mr Mallard’s objections at the weekend, as well as on a report by Wellington consultancy TDM that showed Tranzit’s contracts are actually likely to be better for drivers with less than five years’ experience and worse for drivers with greater than 10 years’ – the most experienced.

Other politicians have put their weight behind the drivers too (and coincidentally got some public-transport publicity).

Are the offers to drivers the contractual equivalent of the “bus hubs”? 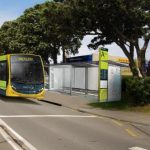 Separately bus operators copped more bad press recently, beginning with a story on Monday 2 July about South Wellington Intermediate School students, under the print edition headline of ‘Students told to get off the bus’.

And on Saturday, it was reported that three pupils from Lower Hutt’s San Antonio school, aged between 7 and 9, have written to Metlink about poor treatment by drivers on their school bus route under new operator NZ Bus. Incidents referred to included refusals to pick students up and forcing a pupil off the bus, through to drivers shouting at students and parents.  Pushing the boundaries with Authority is a key element of kidhood, especially tween and teenhood, (and shouting is occasionally needed at adults too), but refusing to pick kids up seems hard to defend.

(An initial response to the DomPost was handled by Metlink. Why Metlink and not NZ Bus? NZ Bus told journalist Matthew Tso that it’s a contractual condition that they can’t talk to the media without Metlink approval.)

No one is saying that being a bus driver is an easy job.

Journalist Amanda Cropp put the perils of being a bus driver into high relief in a feature article about a rise in serious bus crashes published by the Sunday Star-Times.

As Cropp reported, using Ministry of Transport (MOT) figures, in 2017 there were 161 serious bus crashes resulting in casaulties – 25 of them in Wellington. And yet MOT’s mobility and safety manager told Cropp that the numbers are too small to indicate any trends.

Cropp’s article covers a push by unions to change legislation which currently allows bus drivers to work up to 5.5 hours without a break, a condition the unions say was made for long-haul truckies not bus drivers.

This all comes at a time when, according to NZ Bus and Coach Association CEO Barry Kidd, more than 1400 new buses have been registered in just the last three years nationwide.

Cropp reports that actions being taken to lower the bus accident rate include a campaign to prevent red light running, priority lanes separating buses from general traffic and new technology to monitor driver fatigue and performance.

Will the changes see you taking the bus when you say I’ll take the best way ?