Fuel Prices talk of the town

Petrol prices have dominated news and opinion columns for the last week or so as they reach record levels. In most cases the blame for them has been directed at the government following the most recent increase in petrol tax that was introduced last week. One such example is this piece from the Sunday Star Times pointing the finger directly at taxes.

Aucklanders are already paying a regional fuel tax of 11.5c per litre. As of last week, taxes went up by an extra 3.5 cents nationwide, with similar increases scheduled for the next two years. ACC must have been feeling left out of the action, because it’s just proposed its own hike.

All this is happening while underlying crude oil prices are well off their peaks. If they start rising, or the Kiwi dollar weakens, we’re really in trouble.

That’s right – the pain at the pump has little to do with actual oil prices. It’s all about tax, which now amounts to about $1 on every litre. In a lovely little sleight-of-hand, the government also collects GST on the excise, so you’re actually paying taxes on your taxes.

A near identical piece appeared on Interest.co.nz last week.

And of course the opposition has been jumping up and down about it with Simon Bridges proclaiming:

“Every time a New Zealander puts $1 of petrol in their vehicle, 53c of that is going straight into the Government’s coffers, and the Government’s share and the costs faced by Kiwis is only going to get worse as fuel prices climb,” he said.

I’m not quite sure who did the math though as for that to be true, even with the latest tax increases, petrol prices would need to be $1.87 across the country or $1.98 in Auckland. It’s also a bit rich for him to complain about fuel taxes when they rose significantly under the government he was a minister of.

The below graph shows how the fuel excise duty has changed over the last four and a half decades along with the currently planned 3.5c per litre increases over the next two years. As you can see, since the early 2000’s the tax rose fairly consistently and the current planned increases remain below that general 15 year trend. Note: this doesn’t include GST or the Emissions Trading Scheme charge, currently 4.62c per litre. These fuel taxes are fully hypothecated and go straight to the National Land Transport Fund which is what pays for a large chunk of our transport system. Without it, the government wouldn’t be able to pay for their share of transport plans, such as those from ATAP or projects elsewhere in the country.

But the suggestion a 3.5c per litre fuel tax increase (4cp/l with the added GST) would be primarily responsible for the rapidly rising and record fuel prices is ludicrous though when you think about how much they’ve risen of late.

This can be seen more easily in if we break down the fuel prices into its various components. The data for this comes from the Ministry of Business, Innovation and Employment’s weekly monitoring of fuel prices. The data is to 28th September as at the time of writing this it hadn’t yet been updated with the most recent week’s data which should include that tax increase. As you can see, the component that has moved the most in recent times has been increasing importer costs. Along with the Importer Cost is a steadily increasing margin for importers which currently accounts for over 33c per litre. A decade ago it was less than 10c per litre. These costs combine to give New Zealand one of, if not the highest cost before tax of all countries in the OECD.

Another way of looking at this was this fascinating chart put together by economist Sam Warburton. It also interestingly shows that the advent of the regional fuel tax has put Auckland’s fuel prices much more in line with those in other parts of the country, having previously been much lower. 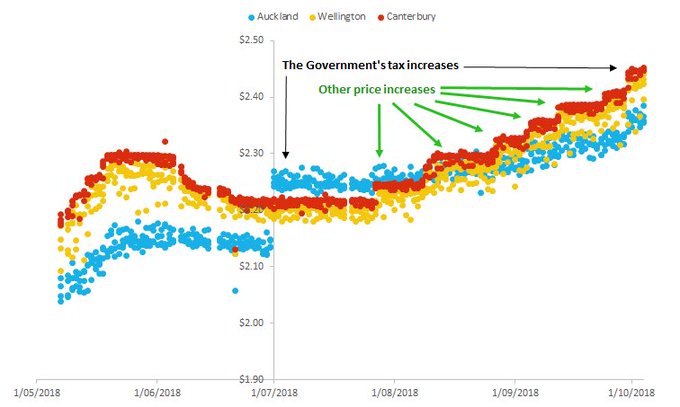 This brings us to yesterday when the government announced they were going to pass legislation to enable the Commerce Commission to investigate fuel prices and margins.

What a lot of the discussion around fuel prices does help highlight is just how dependent we are on petrol and diesel for moving people and freight around the country. We need to, where possible, be building a transport system that delivers realistic options to opt out of fuel prices. Current government policy is at least heading in the right direction in this regard but it’s going to take a long time.

In the meantime, perhaps this is an opportunity that Auckland Transport should look at grabbing. Since the last time fuel prices peaked there has been significant progress on improving PT (in Auckland at least). We’ve had the rollout of electric trains, the introduction of integrated fares and of course just over a week ago they completed the implementation of the new bus network. With the weather improving it is also an opportune time to push cycling as an option. Both PT and cycling are seeing solid and consistent growth in recent times and if AT were to start actively promoting PT and cycling as an option to avoid fuel prices, growth could increase further. Unfortunately this option is primarily an Auckland thing as there are very few others for that.

Did you “take part” in the one-day petrol boycott, or are you regularly “boycotting”?

Do you agree with Matt Lowrie that encouraging people onto public transport, and / or walking and cycling is “primarily an Auckland thing”?