Derek’s guest post has some pretty interesting ideas about moving stuff around in our region so things work better.  It made us think: who’s actually in charge of figuring that out what goes where? There’s no Boss Baby but surely someone’s owning it…?  Spoiler: nope.

Bits and gaps, but no Boss

Since enough Wellington cities rejected the amalgamation proposal in 2012, we’ve stuck with our structure for planning stuff. (Fascinating history of that stuff here.)

That means: four cities, five district councils (most of the public-good physical fabric and operations of our towns and cities), and regional council (air, soils and earth, natural water, biodiversity, bits of public transport), plus a “regional” bit of the national transport agency, and one of the same kind of thing for health services,  and another that decides where schools go.  One council-controlled agency does three waters for the region, plus we’ve an economic development agency, and a regional civil defence body. 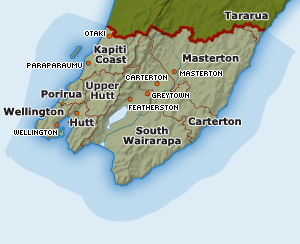 and that’s just the councils (plus Wellington Regional Council)

But where it comes to the Big Calls and to planning ahead so stuff actually works together, there are heaps of gaps.

For example, what movement we need (vs what should be accessible with small trips) is split amongst at least three outfits: NZTA (state highways, more than you’d think), GWRC, your local council.

Where in the region big destinations and services should be vis-à-vis living places for lots of people  – airport, schools, transport nodes – nobody’s on that. What industries and activities should be encouraged and discouraged regionwide – nobody’s got that either. It’s all bits and gaps.

Even if we just look at transport, there’s no Auckland Transport Alignment Project.  On the contrary, our region’s single biggest future-focussed transport investment for ages has an arbitrary cutoff at Ngauranga.

According to the Productivity Commission’s report on local government [PDF], the lack of regional planning is one of the major reasons things aren’t working well (and testimony to people’s workaround powers when things do!).

In maps we find salvation

Spatial planning – essentially using space (locations) – is a damn useful tool. If the Wellington region can at least get the different bodies looking at the one map (or integrated set of maps) that shows All The Things that’ll be a damn good start for regional planning.

It might help bridge some of the jurisdictional divides that create bits of idiocy like the Ngauranga cutoff for Let’s Get Wellington Moving, or the phenomenon of bus station shelters versus (in the conflict sense) the running of bus services.

The Local Government Commission is looking into all this, apparently. They say

“Spatial planning was one of the areas of focus that the Commission and the Wellington Mayoral Forum agreed should be investigated after the reorganisation process was restarted in June 2015.”

I believe there’s also an obligation on councils to do spatial planning, brought in as part fo the 2013 RMA reforms.   Spatial planning is so useful it’s slightly terrifying that all our local government need to be told to use it more.

There’s a wide range of mappish things being used to do spatial planning-type work, region-wide.

Prettiness doesn’t equate to usefulness, but to take just one council there’s the “flat picture”  through to the functional but user-unfriendly GIS based website through to the rather beautiful immersive visualisation (but you need to be in the special goggles to see it properly).  And, of course, Google Maps, Satellite and Earth.

There are lots of reasons why we’re a bit crap at it (just ask Land Information New Zealand and the spatial profession).  But we shouldn’t be – and if it helps us do better regional planning it’s nothing but good!