Moving the stuff so we can move better

Guest poster Derek experiences transport FOMO: he ponders whether Wellington is missing out on solving traffic woes by failing to consider alternative locations for major infrastructure such as Wellington Airport.

Back when the Basin flyover was being debated and dismissed I took scant interest. I only occasionally ventured to that side of town, and when I did it was either walking to the Basin Reserve or commuting to the airport at hours when congestion wasn’t an issue. Since then I’ve visited the hospital a few times and travelled to the airport during normal hours, and by bus or car the journey to both has been congested nightmare. A transport solution is needed, of course it is… or is it?

I recall the debate in the late ’90s around whether to move the main hospital in Newtown out to Kenepuru. The logic was compelling: an ageing and increasing population living north of the city, and the opportunity to build a world-class, single-level hospital from scratch. But the move didn’t happen and redevelopment was undertaken to produce the excellent Wellington Regional hospital we have today (and in Porirua, the newer Kenepuru Hospital continues while the old ground are now slated for homes). 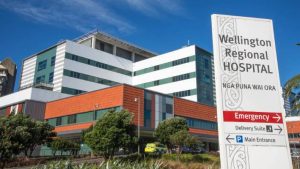 What seemed to be missing from planning considerations was traffic congestion, specifically the amount of traffic winding its way around the Basin Reserve to get to the big Wellington Regional Hospital.

While sitting in congestion on my way to the airport recently, I wondered what percentage of traffic using this road was going to either the hospital, or airport. What would happen if this (presumably) substantial volume was removed?

This article outlines a proposal to move Wellington Airport to a site on the hills north of Newlands.

Traffic was part of this consideration but the most compelling argument to me was the huge environmental and financial cost of extending the current airport runway.

Why go ahead with a costly runway extension without seriously considering relocating the airport? The current airport land could provide a wonderful location for parks and housing and there would be no need to build expensive new roads or a tunnel through Mount Vic.

A relocated airport could incorporate a purpose built public transit service into the city. (In one of my more whimsical moments I had visions of gondolas transporting visitors down the hill into the CBD while enjoying expansive views of the harbour.)

Using technology to ensure we are moving in the right direction

We have a limited resource of land in our beautiful city. Are we making the greatest use of what we’ve got? If we only consider the how (how do we get people to X) without considering the where (the location of X), aren’t we missing opportunities to improve how our city works? [Ed: Talk Wellington would agree]

Developing technology will enhance the planning of our cities. According to this article “NEC can study crowd and traffic movements in order to improve the placement of new roads, cycle lanes and crossings”. This kind of technology could give us the opportunity to look at our features, their form and their functions, and how we ferry ourselves to them, in a much more effective and evidenced-based manner, in order to make our cities more liveable.

Have you also thought “why don’t we move some stuff?”

What do you think about moving the hospital or another big destination?

Is all this just wishful thinking until Wellington gets some decent regional planning?

3 comments on “Moving the stuff so we can move better”