Pomare’s redevelopment was “all about community engagement”, but did it ultimately serve the people who lived there? We ponder the commercial vs community pressures of public/private partnerships.

The area around Farmer Crescent in Lower Hutt was once infamous, dominated by the Mongrel Mob and scene of a 2009 stoush between the gang and Housing New Zealand (HNZ).  The Pomare redevelopment was being planned as HNZ sought to evict a number of families for anti-social behaviour, improve the quality of housing, and create a ‘more balanced community’.

A partnership between HNZ and a private local property development company, City Living Group, the redevelopment aimed to provide a mix of social housing, affordable private rentals, and affordable homes for private ownership.

While the project was supported by a working group of iwi and community leaders, residents had mixed views.  Many of the state houses in the area were in very bad condition, and were unable to be effectively insulated or heated; new homes would be very welcome.  But it was unclear whether displaced renters would be given priority to return to the new houses.

Ultimately, sixty households were relocated by HNZ, mostly to Taita and other parts of the Hutt Valley; four moved completely out of the Wellington region.  Eighty-nine state houses were knocked down, and twenty were built new as part of the redevelopment. 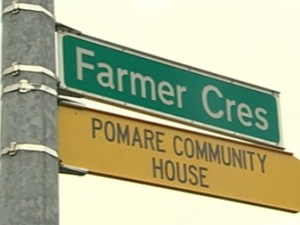 The Pomare redevelopment is now complete, but none of the original residents have returned to the area, now named Riverside Gardens, where the new ‘affordable’ homes cost between $375,000 and $495,000. In response to community input, taniwha and harakeke (flax) sculptures were kept as part of the redevelopment.  HNZ said that it did not make sense to re-relocate residents who had already been moved, and that the new state houses built as part of the redevelopment filled a gap in its portfolio.

Some new residents of Riverside Gardens report being happy and settled in their new homes in the multicultural environment.  Others express concern about their safety, following threatening behaviour from others nearby.  But one significant side-effect of the redevelopment has been on the local school, which saw its roll slashed as former residents moved out. None of the new residents have enrolled their children in the school.

Despite the working group’s involvement in the redevelopment, according to Kim Workman former residents felt disenfranchised by the project, which they felt had not sought to fully understand the community’s dynamics and needs.

A member of the working group, Ken Laban, has also said that if he were to be involved in a similar project in the future, he would want to see a better balance between people and commercial considerations, and queried what the development had done to address the former community’s problems – “few jobs, low education, low levels of opportunity and success”.

So while the Pomare redevelopment has resulted in new, better quality homes, the author finds herself pondering aspects of redeveloping existing communities.

How effective are such public/private projects at making a difference for existing communities, and do such approaches create better places to live for everyone in the long run?

How is commercial viability best balanced against the more nebulous idea of what’s best for a community?

Should existing residents be given priority right of return to an area post-redevelopment?

As we move towards more redevelopments and new developments in our communities, these questions should be part of communities’ discussions with the Government and developers.

2 comments on “No Going Back?”