Today the coalition government released its 10-year Government Policy Statement on Transport, showing how our taxes will be spent on getting around (and quite a lot of our rates too). It’s got some changes from the initial one, which saw much handwaving and consternation, but it’s a strong new direction and at Talk Wellington our hot take is: we’re feeling pleased.

Here’s a quick refresher on what it does and doesn’t do (Ministry of Transport).

People had a say!

The official email from the Ministry of Transport says

“We received record interest in the draft GPS 2018, with more than 900 submissions* from local government, private sector organisations, special interest groups and individuals.”

Hopefully that includes you, dear Talk Wellington readers – good for you!

There’s still a strong focus on rebalancing the transport system so more efficient transport and travel modes can start playing their proper role. Rebalancing means less dosh going to private car passenger travel vis-à-vis public transport and active travel, and less dosh going to road-based freight vis-à-vis rail and (later) sea. It signals a firm intention to make efficient and sustainable travel options a real and competitive part of Kiwis’ daily choice landscape for getting around. Good.
Rebalancing is fundamentally healthy for NZ, we believe, so we’re pleased to see this still the case.

The summary of submissions (p3-6) makes interesting reading. Overall there seems to be support across the submissions for the new approaches, which the Ministers will be happy to see.

“In a response to the feedback, the Government said there was support for the concept of mode neutrality, but some felt the draft statement favoured public transport, rail and active modes over vehicle travel.

Increased funding for public transport and the drop in funding for state highways, along with a reduced funding increase for local roads, suggests the Government has not taken this particular criticism to heart.”

The big strategic outcomes for funding – i.e. the results they want Aotearoa to get once we put in all that money and all that work – are things it seems odd that we weren’t really focussed on before: 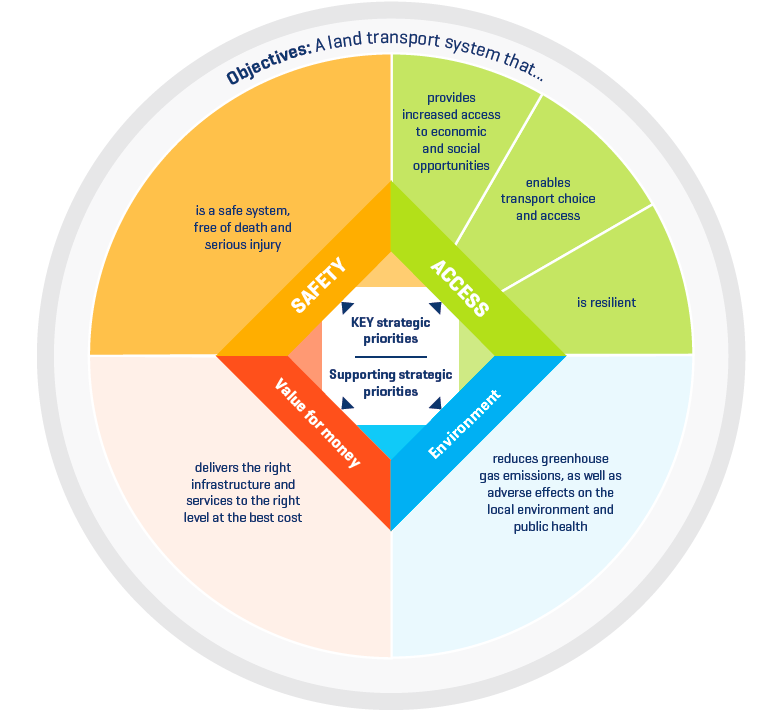 Within this focus on rebalancing, there’s been some change and some staying the same since the draft.

What’s not changed: more for getting around by people power

Given that active travel is the single most efficient and most wholly beneficial way of getting around for short trips – including to and from your public transport or carpark – this is excellent.

As feeling unsafe on the roads is top of the pops for most would-be bike riders choosing not to cycle, and that our urban form focussed on people driving lots is dominant reason in why kids aren’t travelling actively to school, we could see some great boosts in people travelling actively coming through other parts of the GPS.  Namely, making roads safer for all (road safety outcome) and giving people more options to get what they need close by  – the accessibility outcome. It’s feeling quite joined-up – this is a great start!

What’s changed: less dosh for the bureaucrats to do things differently

All this represents a very, very significant change in how Aotearoa has done stuff for the last 50+ years. We’ve had blips in the direction of sustainable and efficient, but for at least the last decade it’s been pretty consistent. Now those times are a-changing… so we’re hoping that while there’s less money for NZTA and councils’ own people, what there is will be used wisely to achieve maximum recalibrating of official minds to the government’s direction. The public service are supposed to be able to do this – that’s why we have an independent public service in NZ that serves the government of the day with free and frank expert advice (unlike the USA, for example, where they fire large tracts of the public service when the administration changes).

It will be really hard though!

The profound disconnection between transport and landuse planning is the Kraken thwarting many best efforts to make towns that are good for us.  It’s been called out by many worthy groups including the Productivity Commission in two of their latest reports. It’s odd that there’s no transport element in the shiny new Urban Ministry, and we can guarantee we’re in for a long long haul before we keep doing landuse as if its magically separate from transport.

One Theme in the GPS won’t fix this, but it’s good that it’s been noted at least.

While there’s less money for local projects, NZTA has already signalled some extra funding (50% taxes, to match 50% rates) available for Very High Priority projects via some new programmes – code, we believe, for “stuff that matches really well with what the government’s trying to achieve”. Given most councils have allocated all their money to projects in the Long Term Plans (hopefully you got your local on?), it’s unlikely they’ll be able to move heaps of priority around. Wise (bold) councils would have betted on this kind of GPS, and can now boost some good progressive projects.

(A $2.3bill question: will Let’s Get Wellington Moving be a good enough fit, progressive enough, to get a wallop of tax funding? As it appeared from the leak a fortnight ago, our money would be on No but that might change.)

Because we don’t do gorgeous graphs but or big city cousins Greater Auckland do, here’s the overall proportions so you can see what these increases / decreases actually mean … 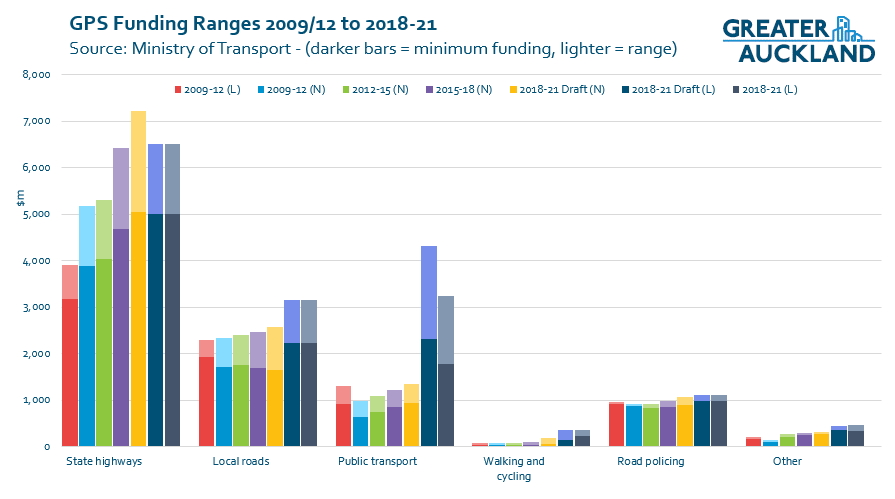 There’s gonna be a petrol tax increase (but it’s worth putting it in context) – and Auckland now has its regional fuel tax too. The equity impacts of fuel taxes are pretty awful, so while rebalancing will be expensive and New Zealand will have to suck that up, we want to see other funding sources that cause less transport injustice (congestion charging!) used pronto.

Anyway it’s interesting to contrast the different news outlets’ reporting on this:

Have you read any bits from the Transport GPS 2018? Or heard any insightful hot takes?