Let’s Get Wellington Moving 3: Planning For Our Future!* (*in goldfish years)

A lot.  This means opportunities and challenges for the city.

Challenges: where all the the sewage and stormwater goes; urban green space; cultivating community; managing demand for beaches; minimising harm to people from earthquakes…

City basics 2: big challenge = how all those people move around.

Let’s Get Wellington Moving is setting out to tackle this challenge. We at TalkWellington welcome their intent and principles with enthusiastic Hurrahs, but have some serious concerns.

More on this below, but first  – a quick reminder of why this matters.

Movement or destination – what are city spaces for? 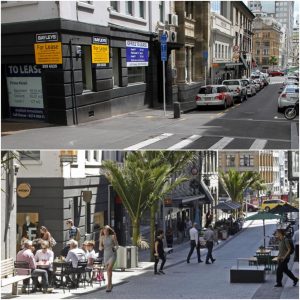 People and goods need to move, but movement can quickly conflict with and undermine place – i.e. destination.  Destination activities are what we do once we’re done moving. The shopping, eating, meeting, drinking, socialising, learning, playing, working that we do at our destination.

For densely-used inner city land, where we want to optimise for “destination” activity, efficiency of transport must be the overriding test. So any city leaders’ mantra should be: get the most people (hearts, minds and wallets) where they want to be within the city, whenever they need, with the minimum impact on what’s around them.

Mass transit is the most efficient way to move people quickly for non-walkable city distances. All the other ways to move people over those short-to-medium city trips are deeply inefficient and undermine place – the destinations – in addition to being bad for the environment and our health.

Mass transit isn’t a silver bullet: it must be part of a whole system: walking, scooting, cycling, private cars, suburban busses, passenger trains, freight by road and by rail. But for moving the greatest numbers of hearts, minds and wallets about within a city, mass transit can’t be beaten.  And for geographically constrained CBDs like Wellington’s, this should have been the transport mantra for decades.

Dozens of the great cities, large and small, that we admire are minimising people’s use of private cars in their dense hearts, giving people convenient, pleasant mass transit (and active travel) choices. Dozens of American cities are pushing back the once-hailed highways from the city centres, reclaiming (at vast expense) land for productive activity and efficient transport.  They are acknowledging efficient transport’s power to move people and allow a pleasant, economically lively city, and starting to acknowledge the futility of building our way out of congestion.

So far, so predictable.

But plot twist! Enter the Let’s Get Wellington Moving timeframe…

Some people know this stuff better than anyone: transport planners and transport economists, like those on the Let’s Get Wellington Moving team. These are the expert folks charged with sorting out transport from Ngauranga to the Airport.  They acknowledge the scope cutoff at Ngauranga is a handicap, especially given all the induced demand from the big new roads beyond the scope line, and Project Director Barry Mein has said repeatedly “Nobody thinks we can build our way out of congestion with more road capacity”.

So… it was somewhat of a “plot twist”/ startling to open up the scenarios document and see, down the bottom of the multi-criteriate analysis:

“Assessment based on expected conditions in 2026”

It’ll take five years just to complete planning and consenting.  Let alone procurement, tendering and so forth.  (Is someone going to attempt special enabling legislation?)

But crucially, transport infrastructure on this scale shapes cities for decades and decades after. Good practice is to look forward at the effects for at least a few decades.  Auckland’s version of this initiative had a 30-year assessment, which isn’t long in the trade.

LGWM are calling this future planning, but it seems some people have very short time horizons. 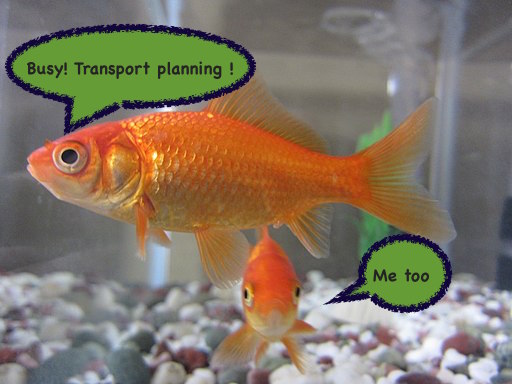 But even a goldfish could see population density begging mass transit:

And we’re confidently guessing that there’ll be no new “mass transit” buses within at least ten years given GWRC’s recent contracting of the bus fleet and other statements. 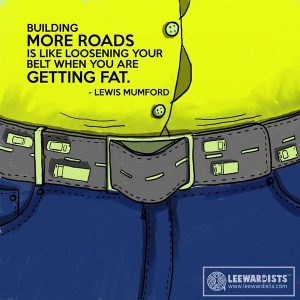 Surely you didn’t choose this goldfish-worthy time horizon because that was the only way to possibly show some (initial) decreases in congestion … while you’re basically force-feeding Wellington’s roads and buying the city bigger pants?

If you also think this is a bit daft, do tell them so. You can give feedback til 15th December. Quick!

Be tactical: remember they’re wanting a sense of the citizenry’s appetite for an approach to solving Wellington’s transport and liveability problems. It’s not a consultation – they just want a steer.

Remember also “fix the problem with more of the same”  (bigger pants) is being pushed by lots of The Establishment, who should know better.  So strongly progressive feedback will be important.

If you’ve no time to enjoy all of their beautifully designed website, and trust Talk Wellington (and every other progressive transport group):

O’Connell Street, Auckland before / after: ohyesmelbourne and Patrick Reynolds, via Greater Auckland