The public feedback from Let’s Get Wellington Moving is now released. For those hoping for a more progressive direction for Wellington City’s transport, it sounds pretty good… a few initial thoughts while we read the report!

Here’s the update with all the interesting documents.

We’re digesting the press release from Barry Mein, the project director, which has some highlights:

from the press release

A few things jump out of these themes.

Scenarios were presented as a cost-based spectrum whose wording implied “do lea$t” to “do mo$t”, which we and others thought was a bit daft given how “do better with the same mo$t” was not in there. 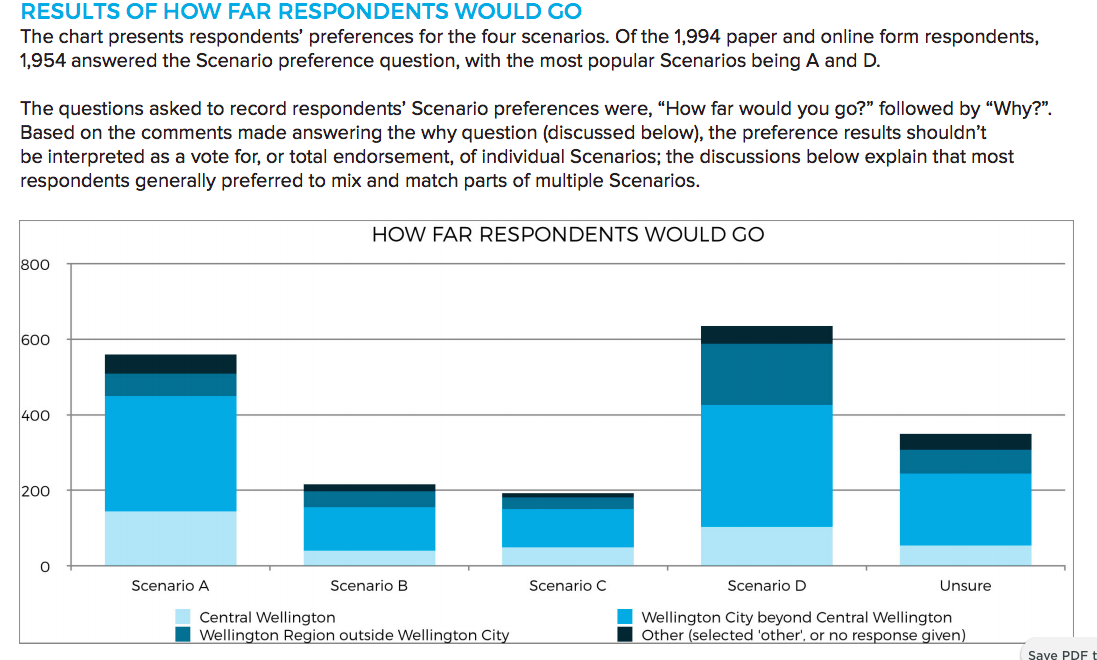 From the Global Research report

Does this spectrum presentation explain the two-peak graph here? There’s also a lot of “unsure” people.  Regardless, it’s pretty fascinating to see that a scenario presented essentially as “do bugger-all for cars, minimal for PT, remove a whole lot of parking” got such strong support.

Pick-and-mix from now, with some other goodies

Mein reminds us that:

“The recommended programme is unlikely to be one of the four scenarios as presented. It will include parts of the scenarios, as well as other elements supported by the public feedback and our ongoing work.”

We remember too that incentives and travel demand management weren’t included in this engagement to protect our brains, despite being acknowledged as essential.  And the consideration of light rail was criticised pretty hard.

So all eyes are definitely now on the black box wherein officials are compiling the ultimate recommended programme.

Wellington’s done pretty well overall to get the large number of people commenting – 2,000, not counting organisations. Watch as the press releases come out – it’ll be interesting to see whether organisations are happy, surprised, sad – and what they urge leaders to do.

Crucially, given how many people seem to believe that consultation and engagement is a vote – Mein says:

“It’s important to note that the preferences are not votes – this isn’t a referendum. Many people who selected a preference told us what they would change about their preferred scenario,” says Mr Mein.

So what influence will this feedback have?  They’ll put it in the mix….

“We’ll use their feedback to help guide our work as we develop a recommended programme of investment.”

Ultimately, it’s a set of relatively shadowy decisionmakers who will make the calls on what gets in the Wellington Regional Land Transport Programme – and how much is tax funded via NZTA, rates funded by councils, or even (gasp!) user-pays or something else.

Read the full report on the feedback here